This Pear + Leek Galette with Goat Cheese + Walnuts is a simple, savory free-form tart that makes a perfect Thanksgiving appetizer.

We’re less than a week away from Thanksgiving, and let me just say, I CAN’T WAIT. I’m not doing much of the cooking this year, which is essentially the same as every year. The older generations have simply not passed that torch yet, and I’m totally okay with it. My time will come, but for now, I’m just going to revel in the enjoyment of being a guest. That said, of course I can’t show up empty handed. 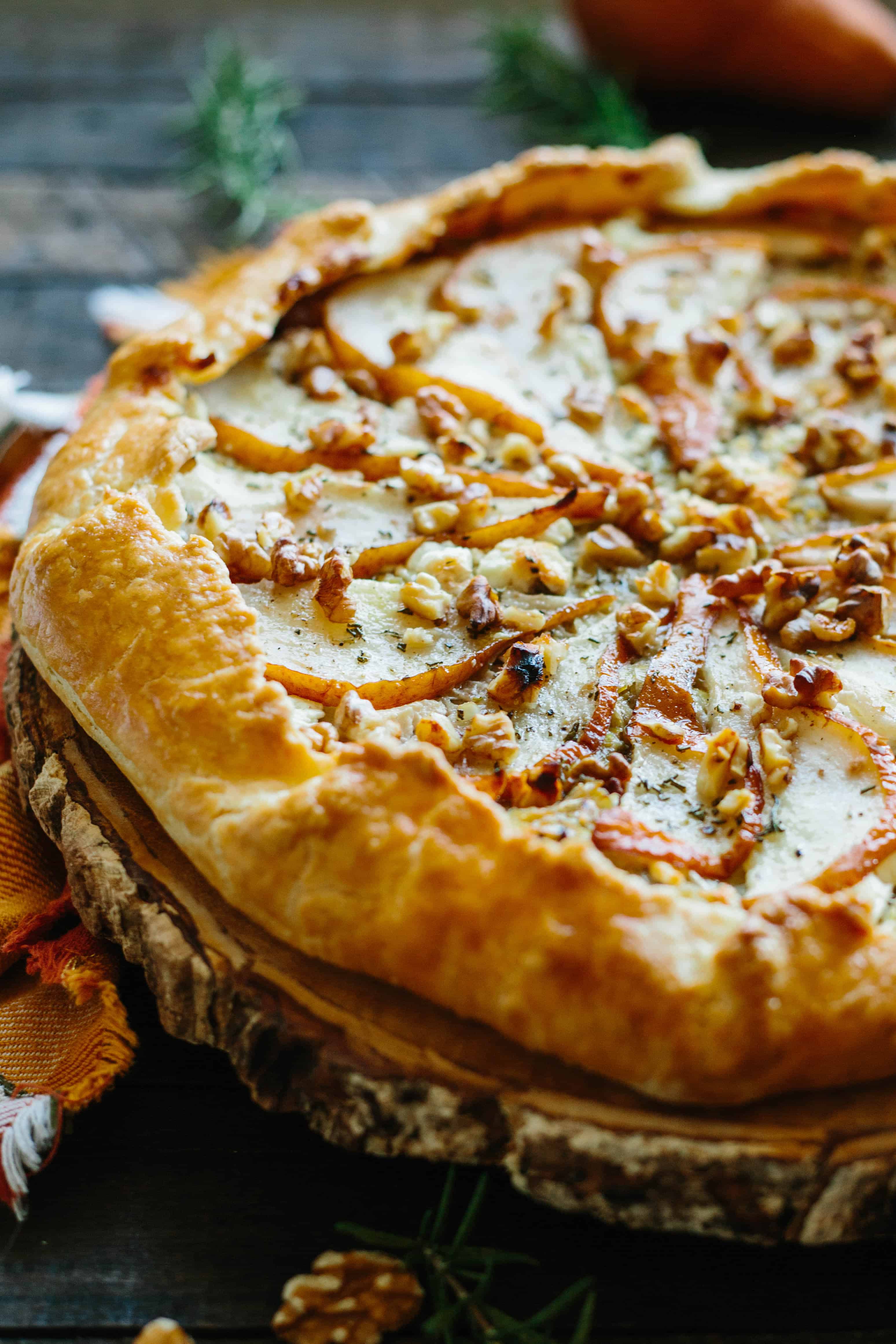 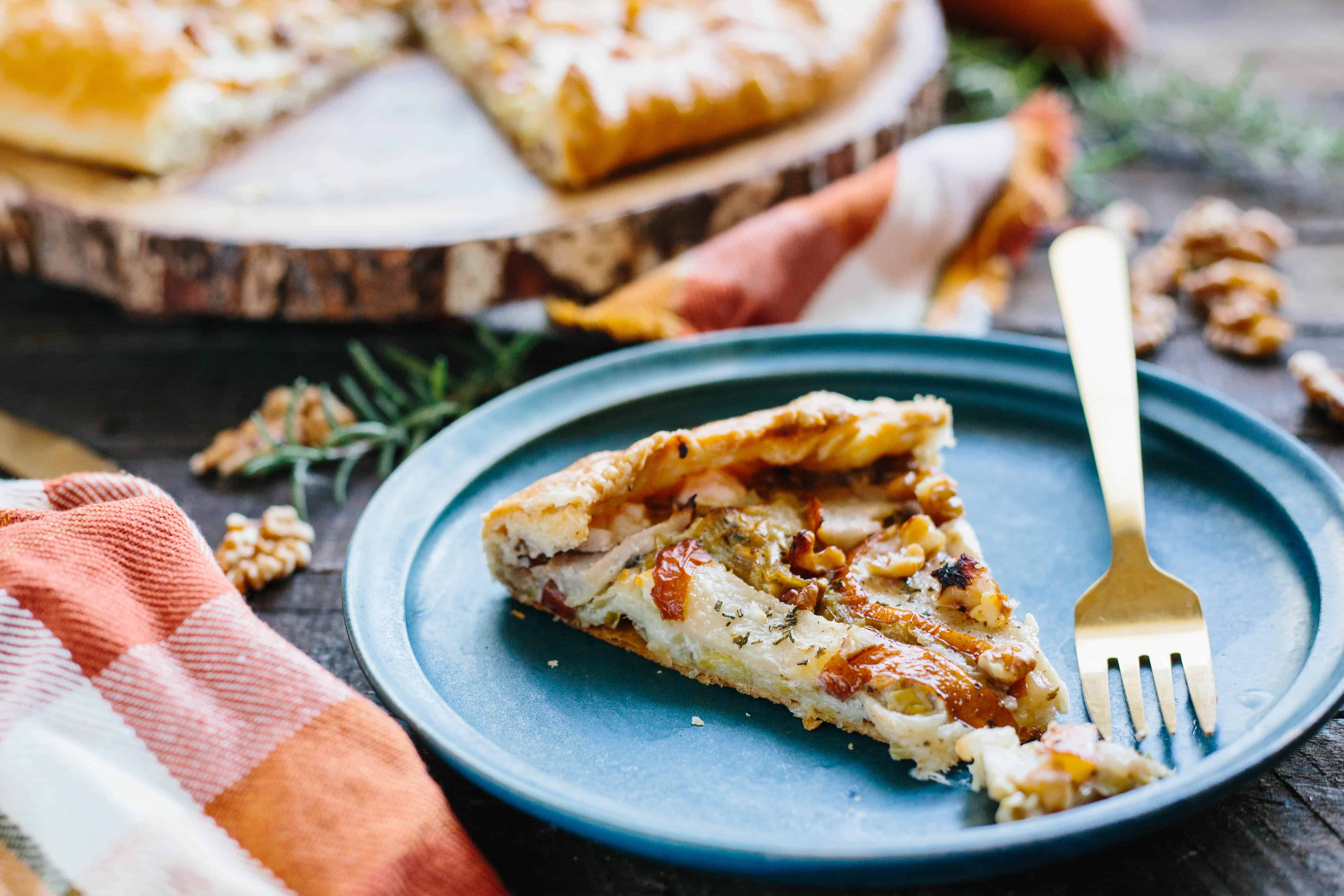 For one, I’m definitely bringing this Cranberry Meyer Lemon Pie because I’m obsessed and it was just too good not to make again. I’ll probably bring this Brussels Sprout + Kale Salad too, because it’s nice to have something green and raw, and it’s pretty much become a staple at Thanksgiving anymore. Or maybe I’ll make this Fennel + Onion Gratin because it’s understated and awesome. I also want to bring an appetizer, because it’s arguably the most under-appreciated part of the day, but also one of the most important.

This savory Pear + Leek Galette is the perfect appetizer to bring on Thanksgiving. It’s great served warm or at room temperature, and if you’re already going making a batch of pie crust, you might as well go ahead and make some more. This recipe walks the line between savory and sweet, which is what most of my favorite foods do. It makes a lovely appetizer for sure, but it would also be really nice served as part of a cheese coarse. Let’s be real, though. No one is serving a cheese course on Thanksgiving (but if you do, hit me up). 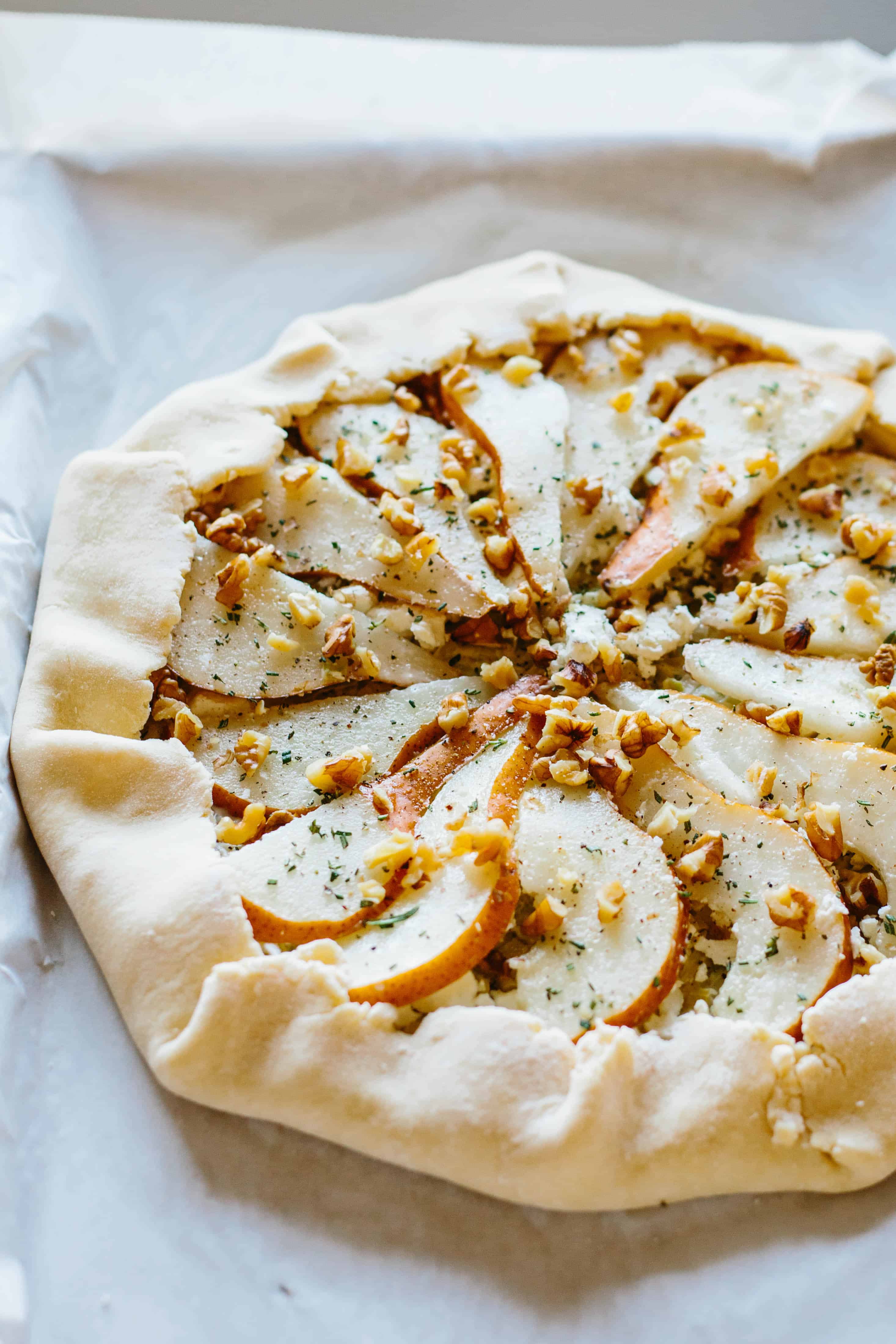 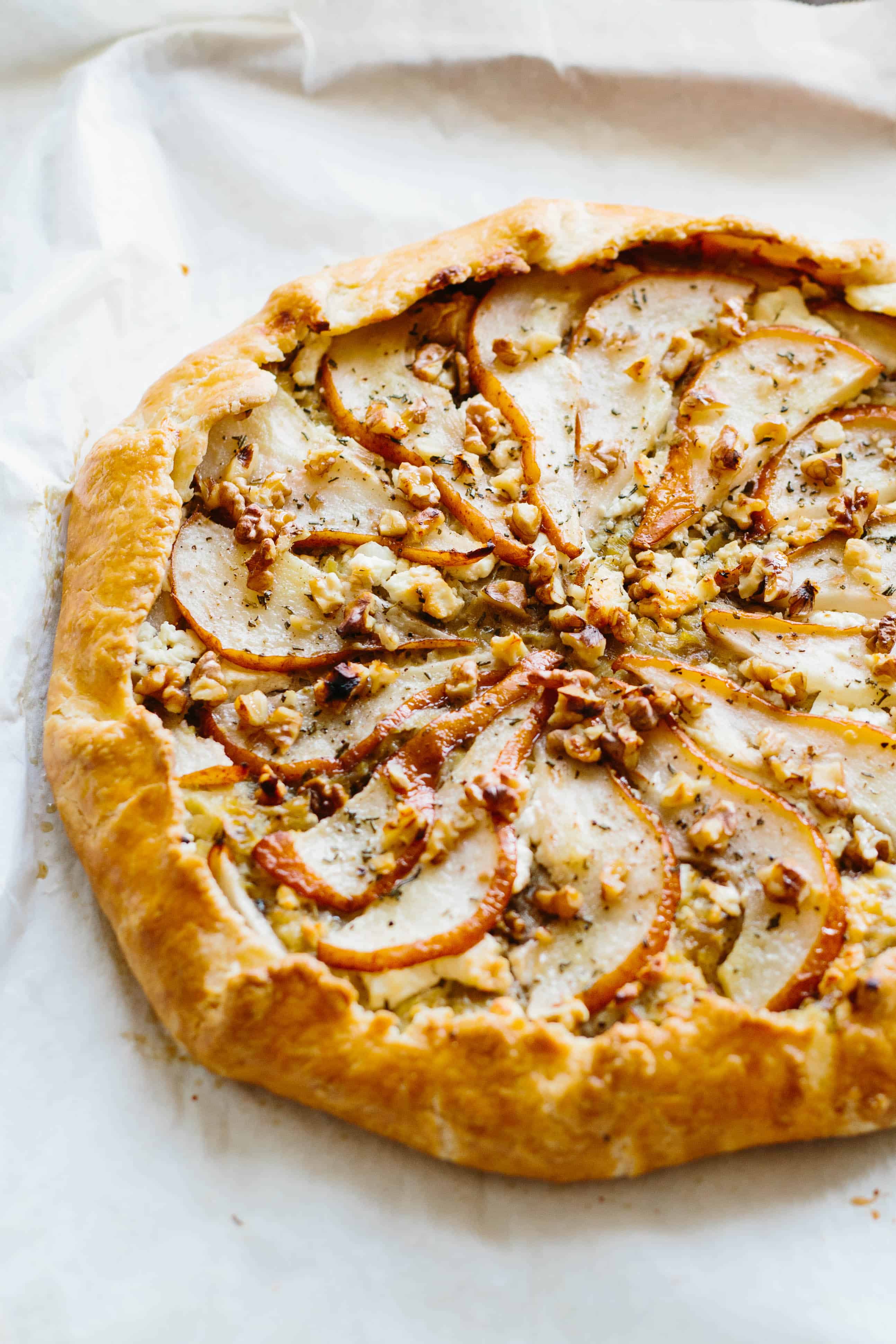 Thinly sliced leeks get cooked down with Dijon mustard, rosemary and a touch of cream. They’re spread onto a buttery pastry crust, topped with crumbled goat cheese, then a layer of thinly sliced pears and finished with a sprinkling of chopped walnuts. It’s full of fall flavors and textures galore: The crisp, flaky crust, the smooth, creamy leeks, the tender pears and crunchy walnuts. Not to mention, it will undoubtedly be the most attractive dish on the appetizer table (no offense, veggies and dip).

I made this galette on a cool, rainy morning and we couldn’t stop snacking on it all day. It’s definitely a crowd pleaser, and transports pretty easily too. The only downside is that you won’t want to stop eating it, which will make it hard to save room for turkey!

I’d love to know what you’re planning to make this year for Thanksgiving. Are you hosting, or do you also get to revel in being a guest? Leave me a comment and let me know! I can’t wait to see what’s on your menu. 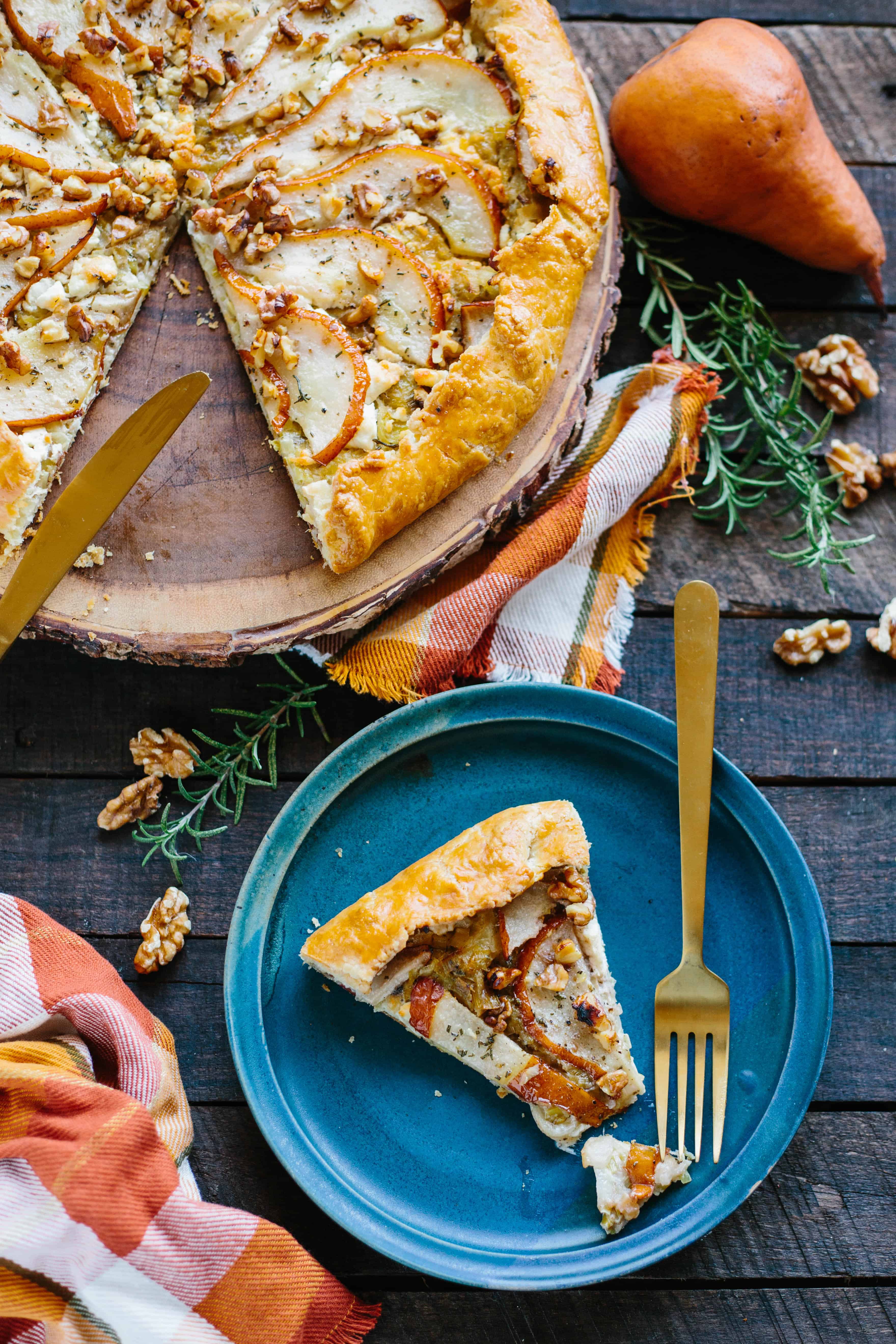 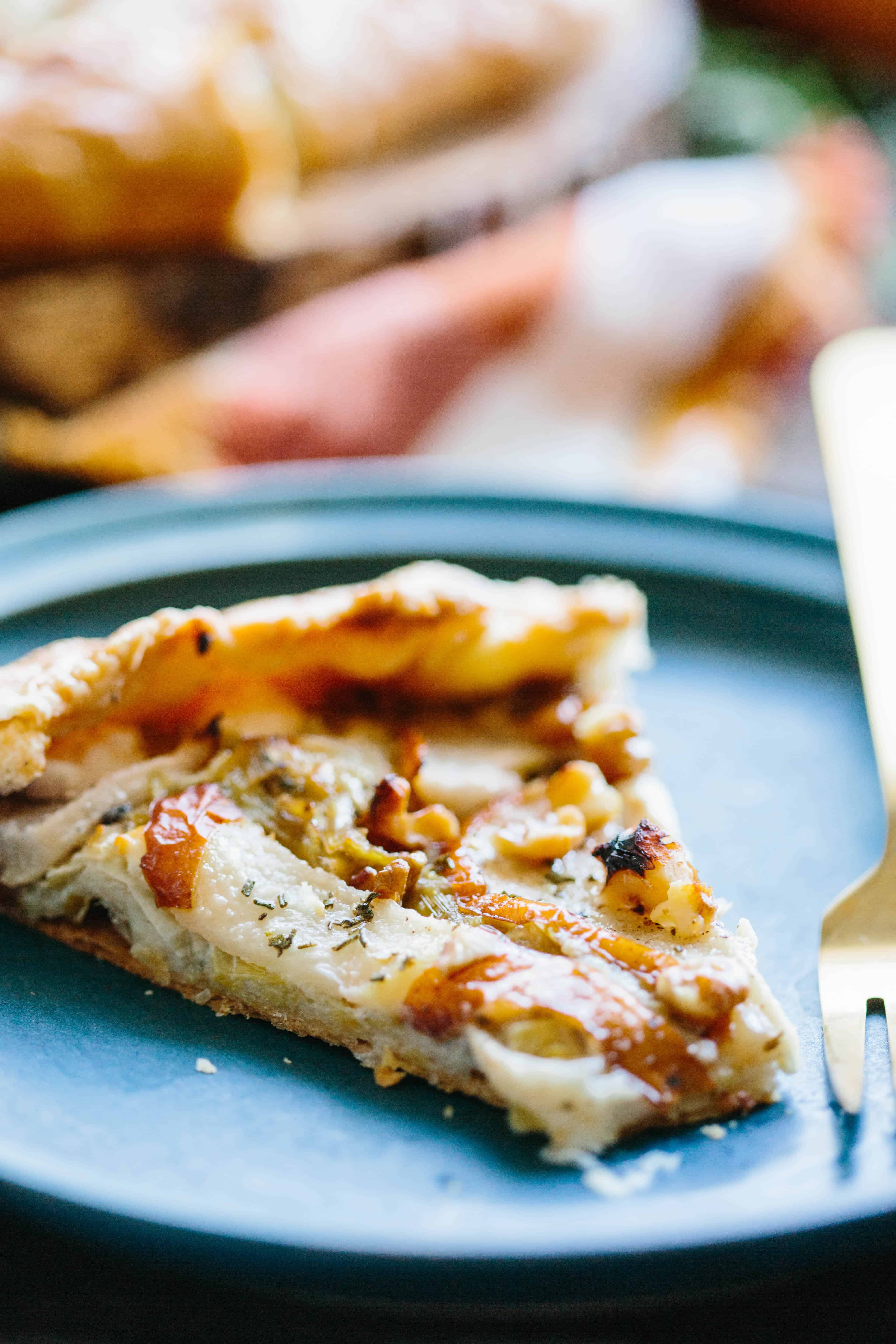