These sweet, coconutty Irish Potato Candies aren’t Irish or made of potatoes, but they are ridiculously tasty!

Have you heard of Irish Potatoes? Not the vegetable, the candy. There’s a good chance you haven’t, unless you’re from the greater Philadelphia area.

What are Irish Potatoes?

Irish potatoes aren’t actually potatoes at all. They are creamy, coconutty candies  that get formed into little balls and rolled in cinnamon to mimic the appearance of potatoes. They become popular in and around Philadelphia every March for St. Patrick’s Day. 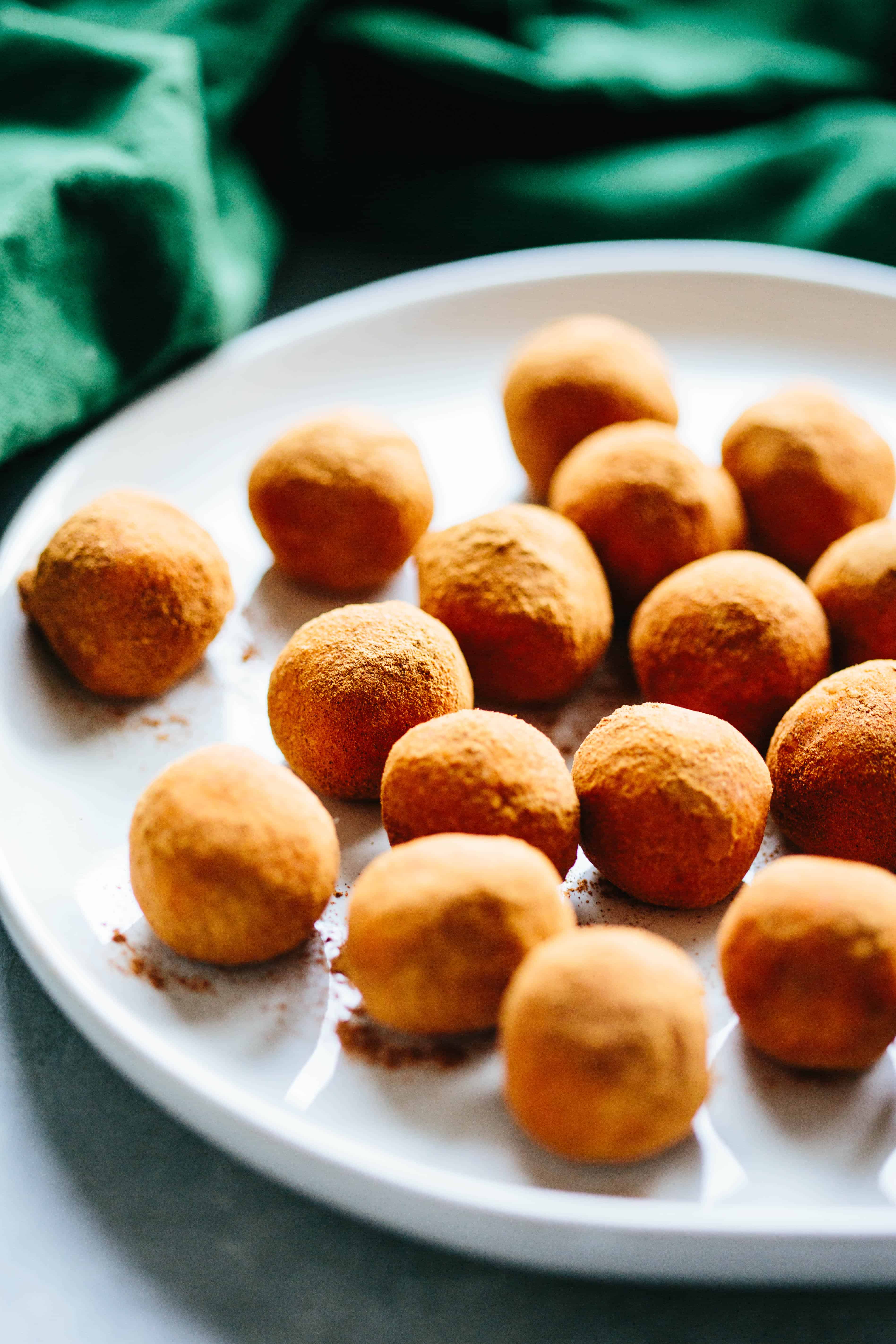 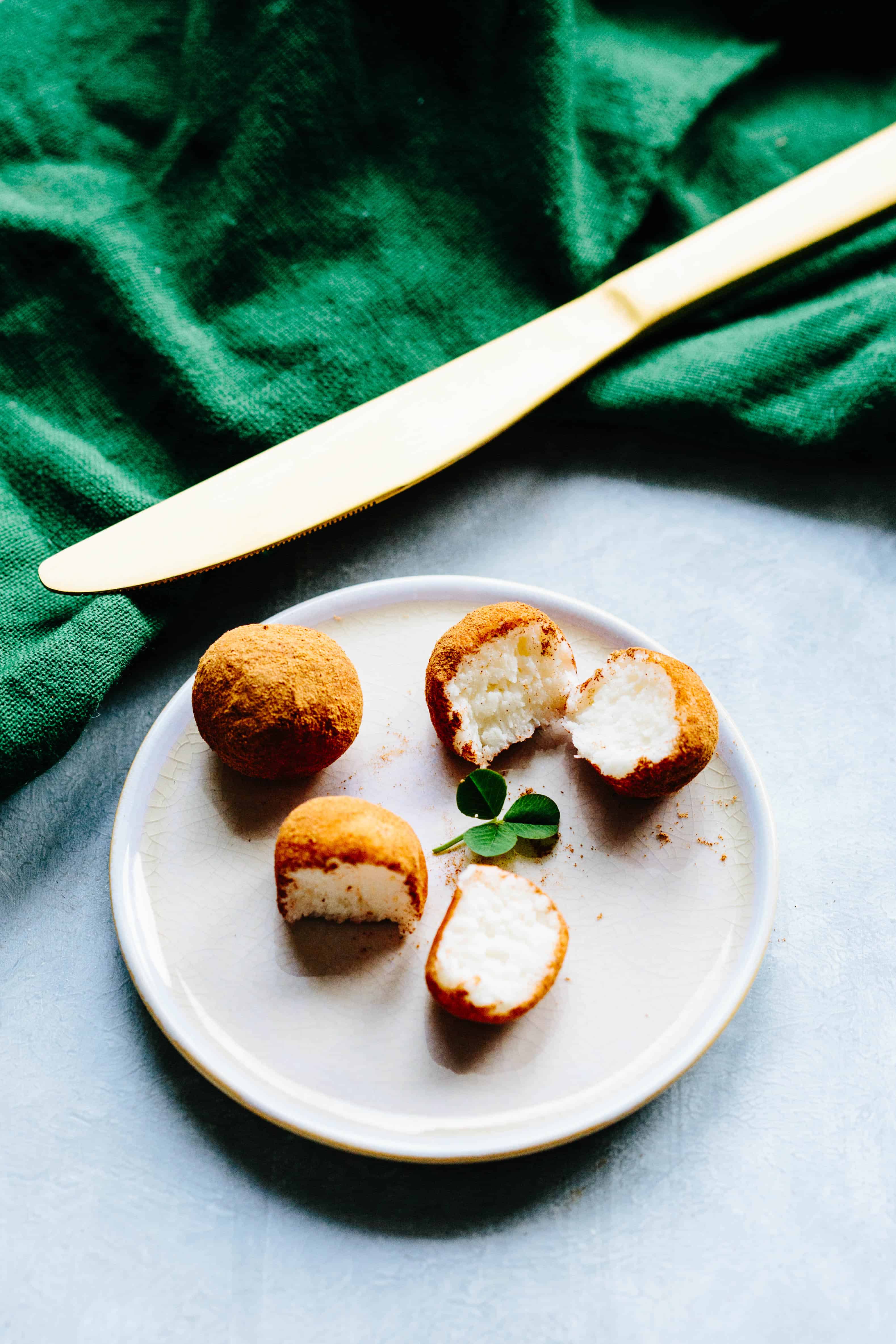 Where do Irish Potato Candies Come From?

Having grown up with these kitschy confections, I always assumed they were a universal treat enjoyed by people all over the country, and of course over in Ireland where they surely must have originated. Only it turns out that’s not the case… At all. Most people in the US have never heard of Irish potato candies, and they’re most definitely not found anywhere in Ireland.

If you pick up a box of Oh Ryan’s brand Irish Potatoes, you’ll see “A Philadelphia Tradition for Over 100 Years” stamped on the package. Yet, like many other regional specialties, few people actually know how, when or where these seasonal sweets came to be. It’s said that the tradition of making them began as a way to honor the millions of people lost in the Irish Potato Famine of the mid 1800s. But no one knows exactly who came up with them or how the recipe came about.

What are Irish Potato Candies Made Out Of?

There are several different Irish Potato recipes floating around out there. Some of them call for corn syrup and others are rolled in cocoa powder. But to me, they just aren’t the same without the zippy tang from the cream cheese and the sharp bite of cinnamon.

My recipe is adapted from my friend Lauren. Her recipe is nearly perfect on its own, but I made a few small changes to make it even better. Irish potatoes are a candy, so by definition they’re going to be sweet. The original recipe calls for sweetened coconut flakes, but I had a bag of the unsweetened stuff on hand so I tried using that instead and loved the result. Considering the recipe uses an entire pound of confectioners sugar, the unsweetened coconut barely made a difference.

Despite all that sugar, the original recipe didn’t call for any salt. And to me, salt is essential in all sweets.  It helps to balance out the sweetness while enhancing some of the other flavors, like the vanilla and cream cheese. 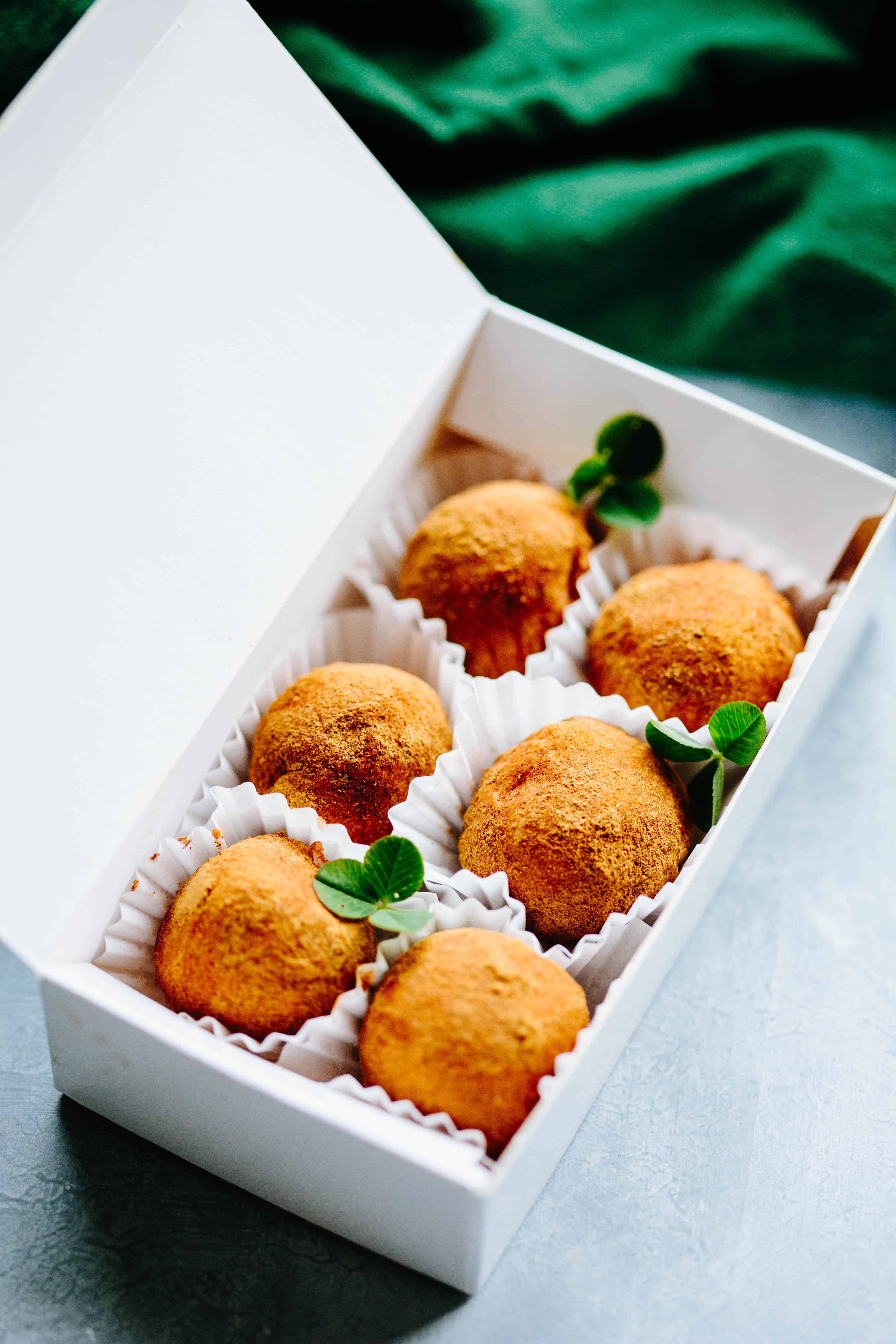 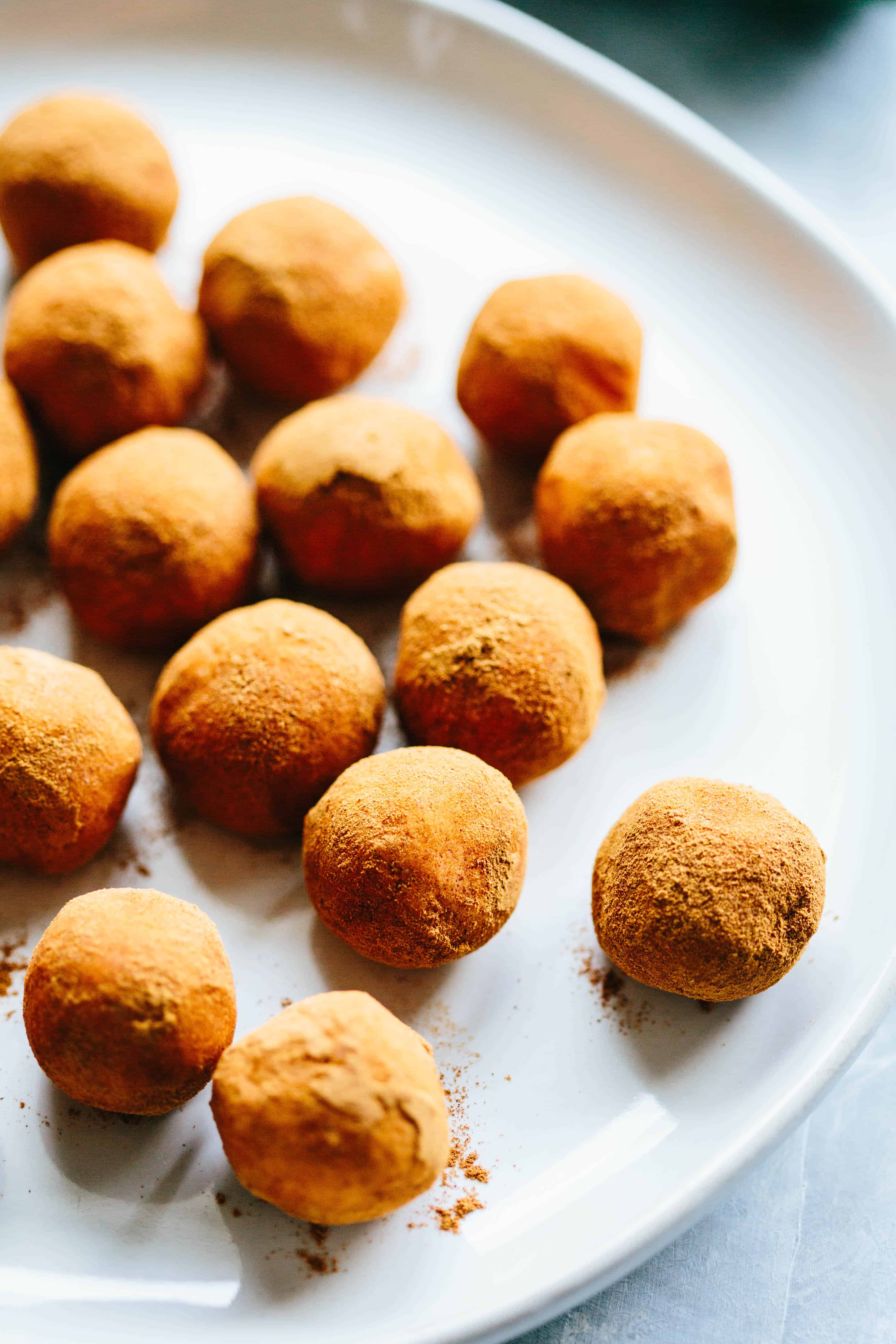 How Do You Make Irish Potato Candy?

Beat the butter and cream cheese together, then add the vanilla and salt. Slowly beat in the powdered sugar one cup at a time, then mix in the coconut until fully combined. Chill the mixture for a bit to make it easier to handle. Then, scoop out little bits, shape them into balls and roll them in cinnamon. That’s it! So fun to make with kids.

How Do You Store Irish Potato Candies?

If you’ve had Irish Potatoes before, you know how good these little cinnamonny coconutty candies are! But if you haven’t, I urge you to give them a try. They’re my favorite Paddy tradition, and they’ll become yours too. 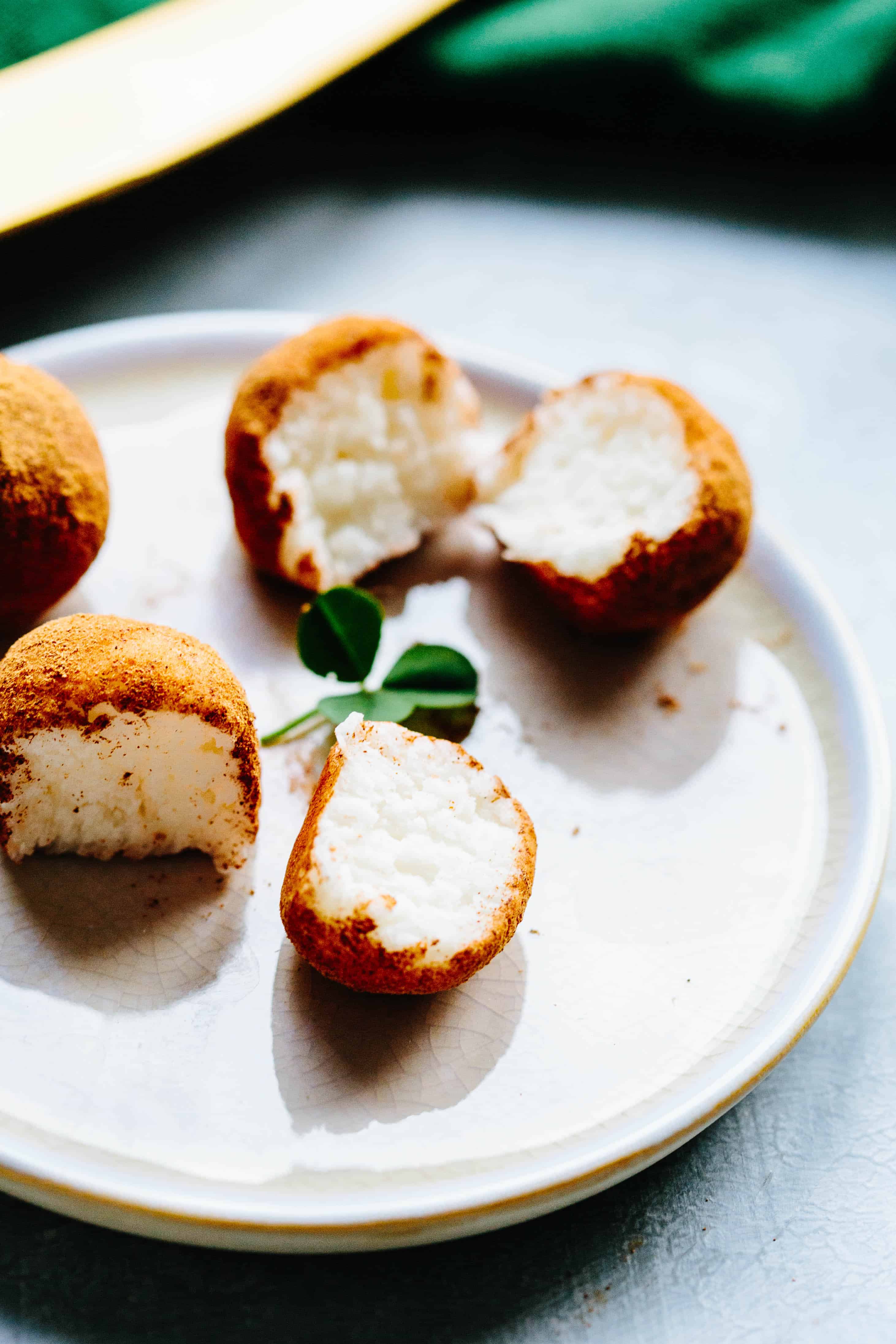 Try these other Irish recipes for the BEST St. Patrick’s Day ever!

These sweet, coconut Irish Potato Candies aren’t Irish or made of potatoes, but they are ridiculously tasty and the perfect treats for St. Patricks’ Day! This recipe makes the BEST Irish potatoes you’ve ever had!

*if using salted butter, reduce the salt to ¾ teaspoon 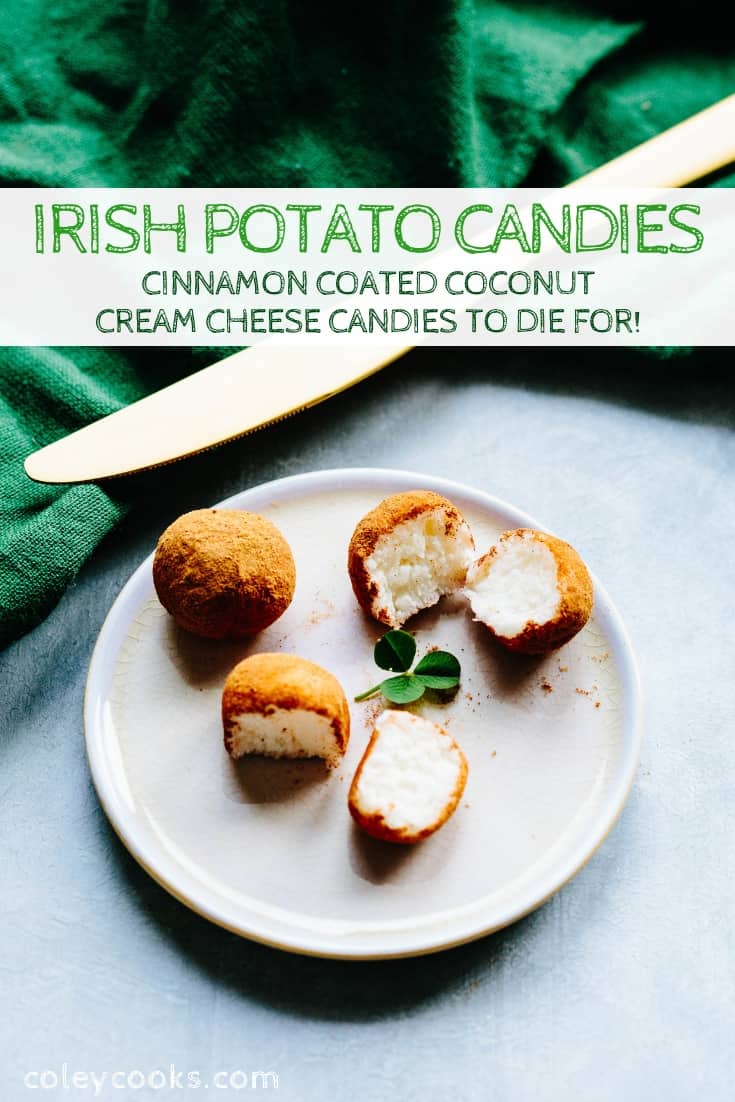