This Rhubarb Almond Cake is a tangy, dense, and delicious cake flecked with long strips of vibrant rhubarb and finished with boozy bourbon whipped cream. So great for Spring!

Rhubarb is a relatively new phenomenon in my life. I didn’t grow up eating it, and when I tried it as a teen, I was definitely not impressed. Years later, I was captivated by rhubarb’s wild popularity in the food world, so I gave it another shot. This time, I didn’t hate it, but I found it perplexing. Sour, stringy and very vegetabley. I just couldn’t wrap my head around it, even though I wanted to.

The following year, I gave rhubarb another go. This time, something clicked. I roasted it with strawberries, vanilla and bourbon, and after one bite, I was hooked. Fast forward two years later to today, and I am deeply involved in a passionate rhubarb love affair. 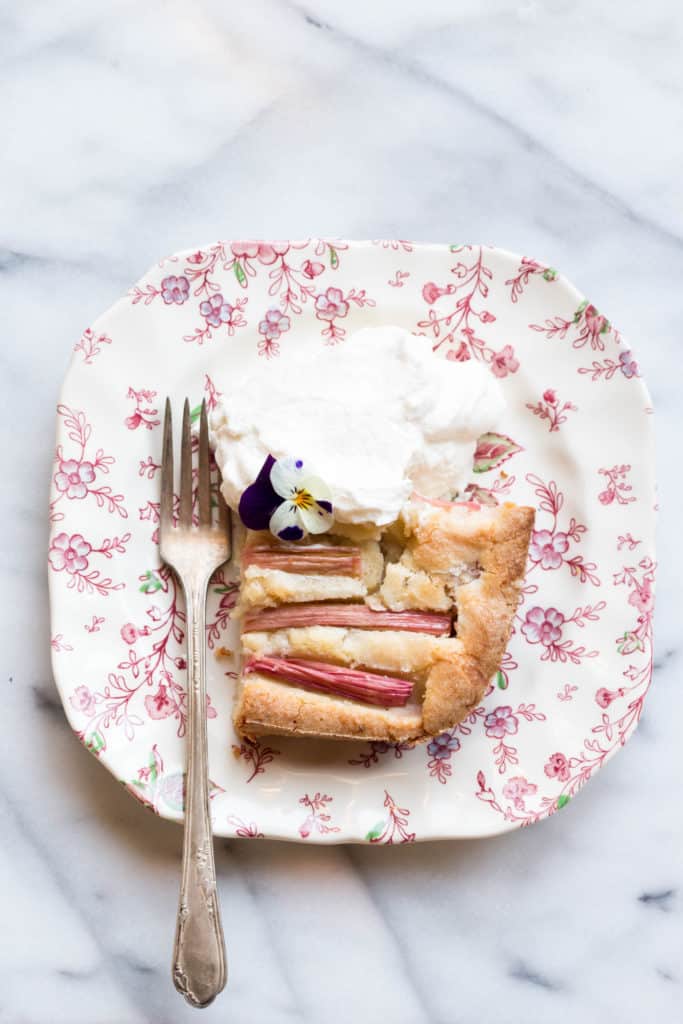 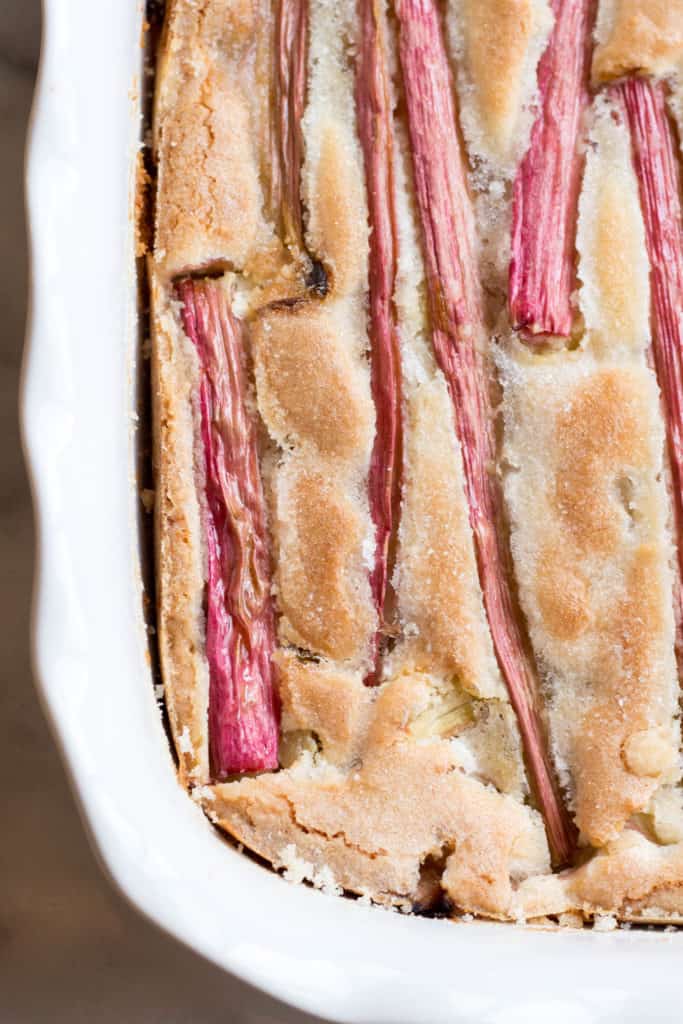 I just can’t seem to get enough of the ‘barb these days. I even planted some in my garden this spring, which has proven to be quite a difficult endeavor thus far. Rhubarb is a perennial, meaning it comes back bigger and stronger year after year. They say not to harvest it during the first year, as it needs to develop strong roots and become established. Having a rhubarb obsession and a rhubarb plant in the backyard that can’t be harvested has not been easy. This is what we call a “first world problem.”

I was first drawn to this cake by it’s attractive appearance after stumbling upon its picture on the interwebs. Those long stalks of rhubarb forming abstract geometric lines throughout the cake are so pretty and fashion forward. I was also intrigued by the addition of almond flour in the batter. I threw it together, surely not thinking it would be one of the best cakes I’ve ever made, but honestly, this is one of the best cakes I’ve ever made. It’s a bit dense, and supremely moist, not-too-sweet and perfectly tangy from the ‘barb. The edges are crisp and a little chewy from the almond flour, making them the best part of the whole cake. Chaser and I fought over the very last crumb. 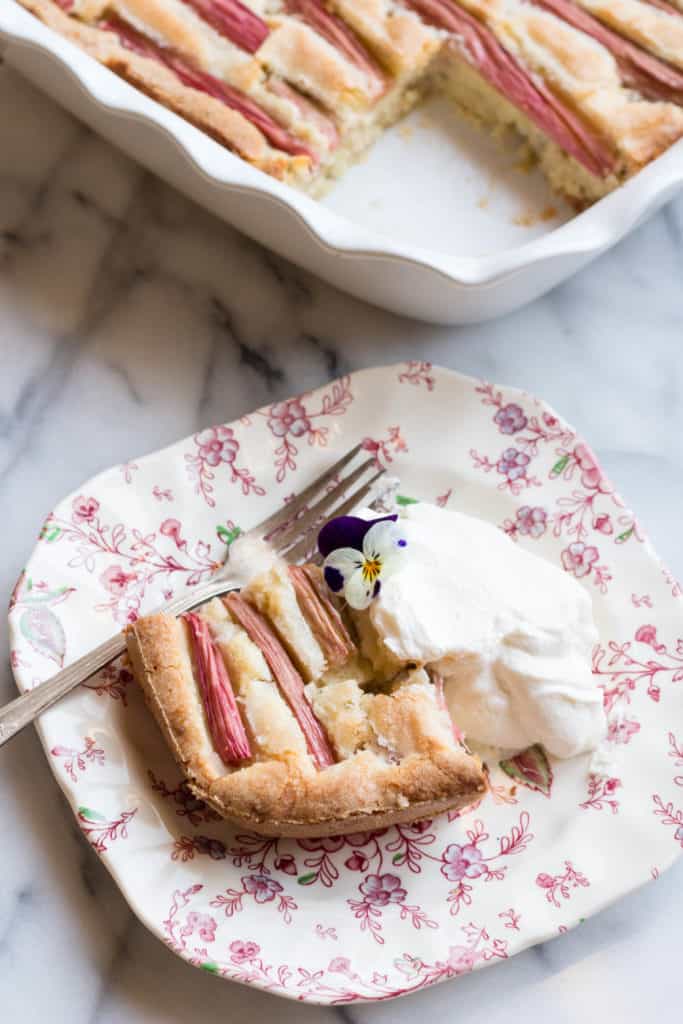 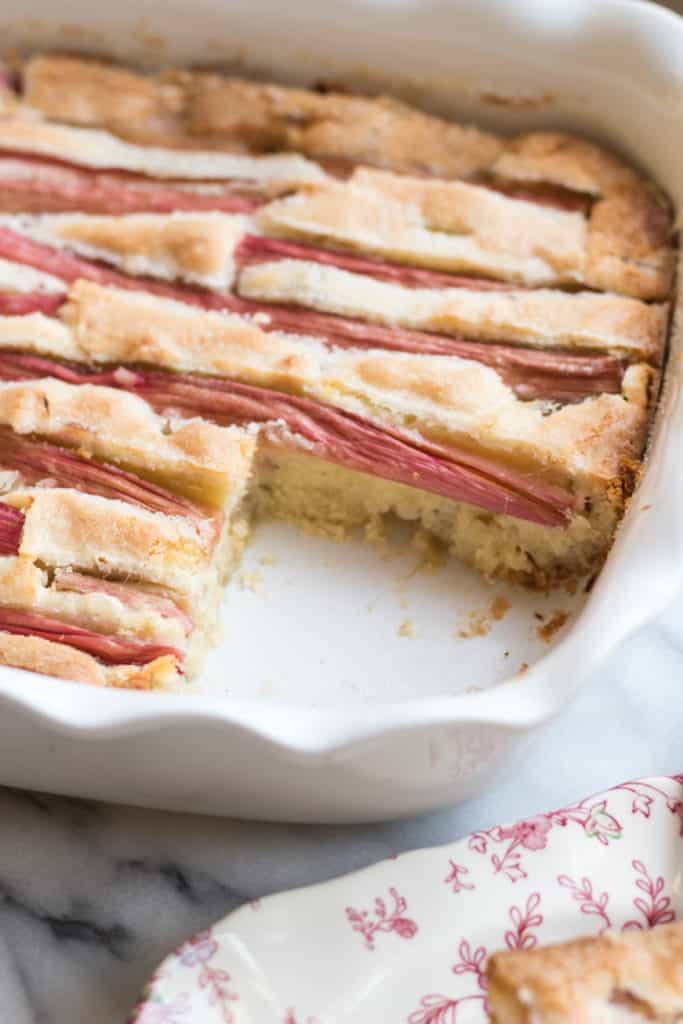 I added a little bourbon to the batter to give a little oomph of flavor. The combination of bourbon, vanilla and strawberries is what got me to love rhubarb in the first place, so this is my way of tipping my hat to that first game changing recipe.  You won’t even know the bourbon is there, and it can totally be omitted if you’re not into that, or if don’t want to buy a bottle for such a small amount. Extra bourbon never goes to waste in our house, but you can substitute Irish whiskey, or even rum, if that’s what you have instead. I won’t tell.

I also add a splash of bourbon to the whipped cream, because, well, YOLO. It gives it a nice little kick, without being boozy, and is quite literally the icing on the cake. You can leave out the  bourbon or leave out the whipped cream altogether, as this cake manages just fine on its own. Not to mention, when you leave out the bourbon whipped cream, it becomes more appropriate to eat for breakfast. And whenever there’s cake in the house, I have a hard time not slamming it into my face first thing in the morning… Which is why I try not to keep cake in the house. But at least this one has a little yogurt, plenty of almonds, and lots of fresh rhubarb, so it clearly has breakfast written all over it. 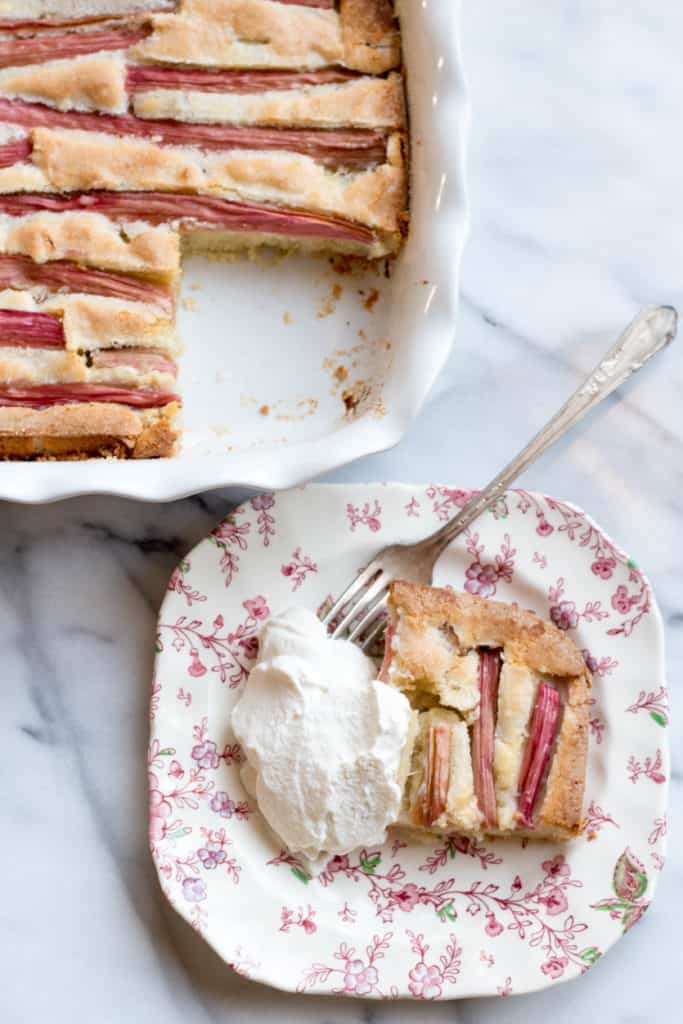 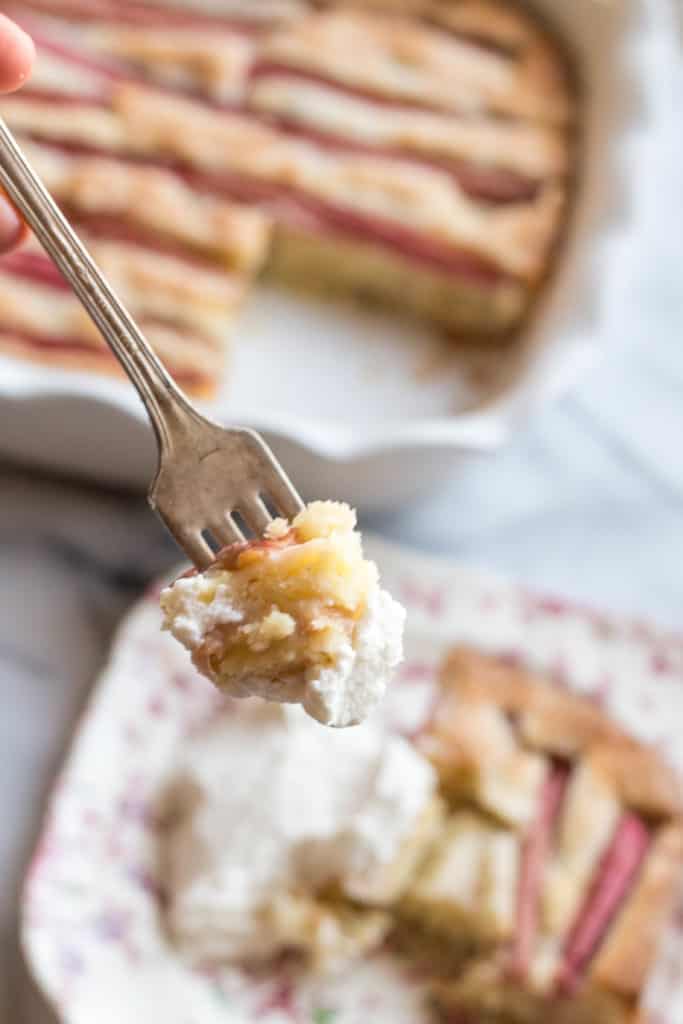 This Rhubarb Almond Cake is a tangy, dense, and delicious cake flecked with long strips of vibrant rhubarb and finished with boozy bourbon whipped cream. So great for Spring! Adapted from Bon Appetit.

For the Rhubarb Almond Cake

For the Bourbon Whipped Cream 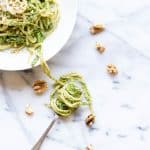 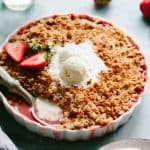 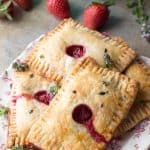 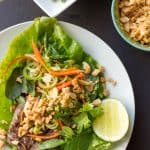 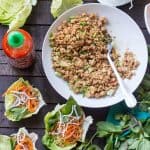 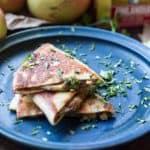