This recipe for Everything Bagel Pull Apart Bread with Scallion Cream Cheese is buttery, rich, flavorful and perfect for brunch!

I’ve been wanting to make one of these pull apart breads for as long as I’ve been seeing them all over the internet (which is really a very long time).

I don’t even know what to say about this recipe other than the fact that, yes, it is as amazing as it sounds. If you love everything bagels and that signature seasoning blend as much as I do, then you’re going to absolutely love this pull apart bread. 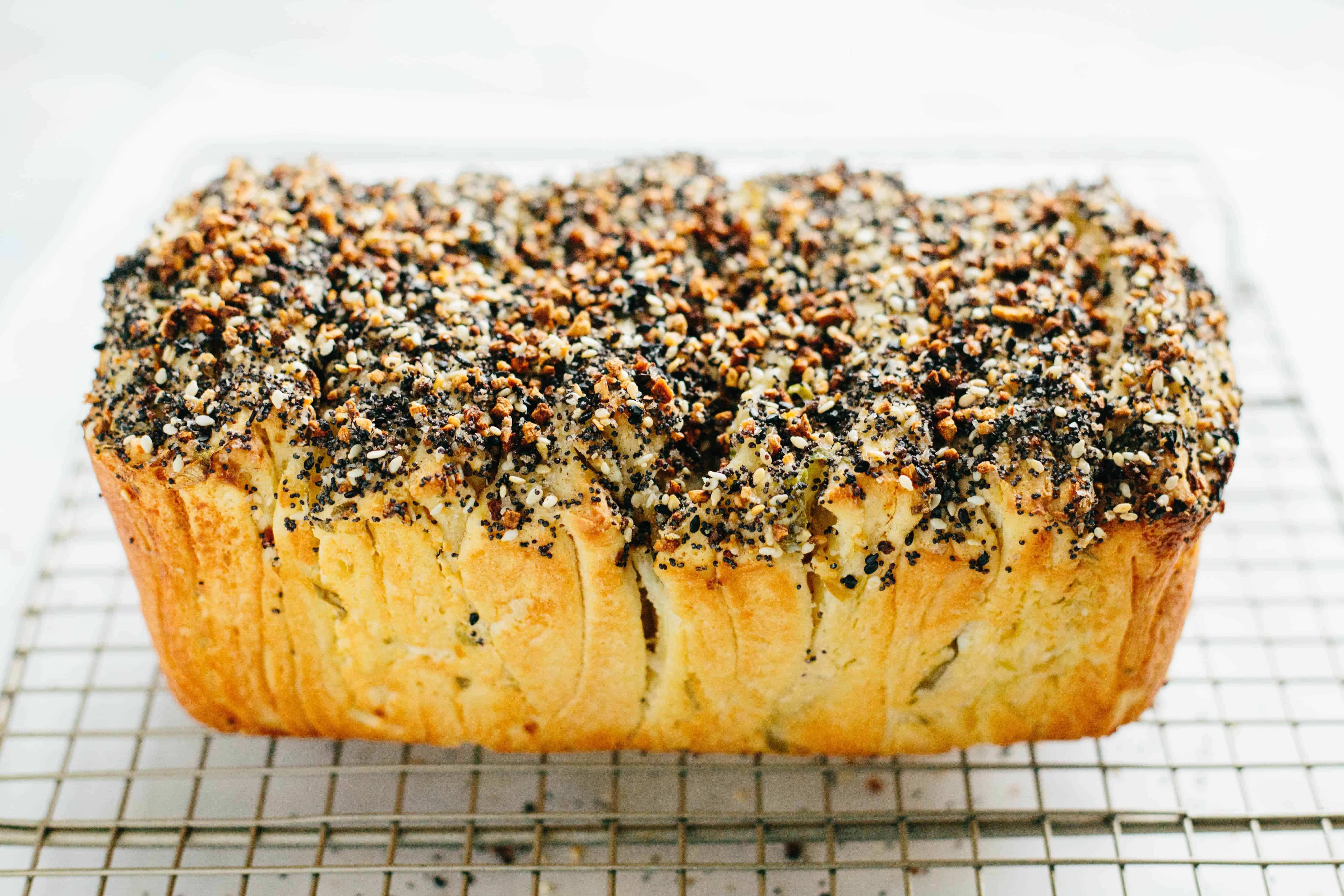 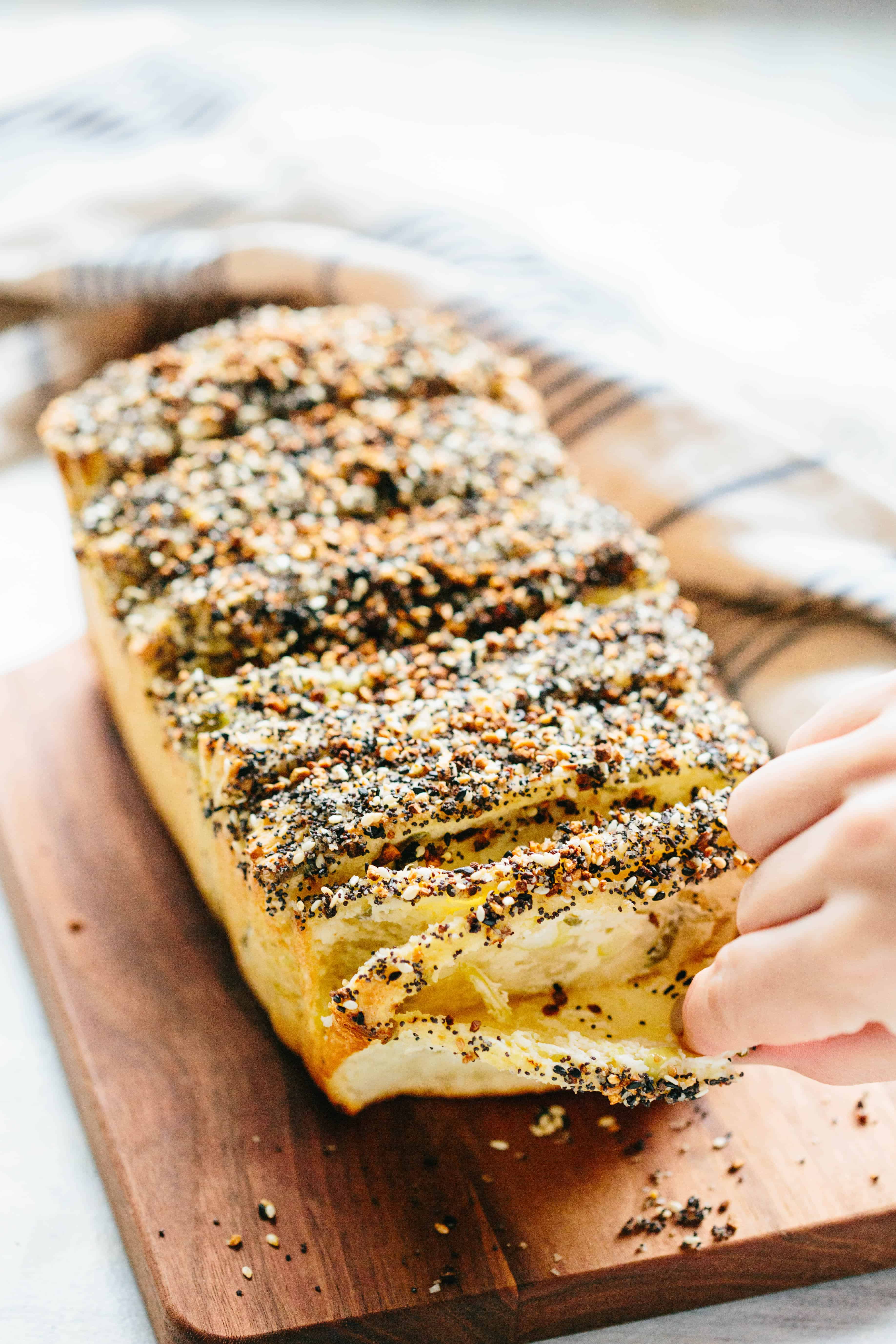 If you’ve never seen these “pull apart breads” before, think of them as a different form of monkey bread. You’ve had monkey bread, right? It’s that sticky, cinnamon-sweet breakfast treat that we always ate at sleepovers growing up. It’s made by stacking together individual little balls – or in this case, strips – of dough, and then once baked, it will separate into layers as you pull it apart.

I really wanted to make a savory pull apart bread, so I went for it with the everything bagel seasoning and MY GOD it was a great idea. The dough is pretty simple. I used this one from King Arthur Flour, which calls for using a small amount of potato flour to make it extra light and tender. I did as I was told and loved the results, but they say you can either leave it out or substitute it with corn starch with no problem. I can’t speak for how goo it will be sans potato flour, but it might even benefit from being slightly less tender and fluffy, since it will have more of that chewy, dense bagel texture. You can’t go wrong either way. 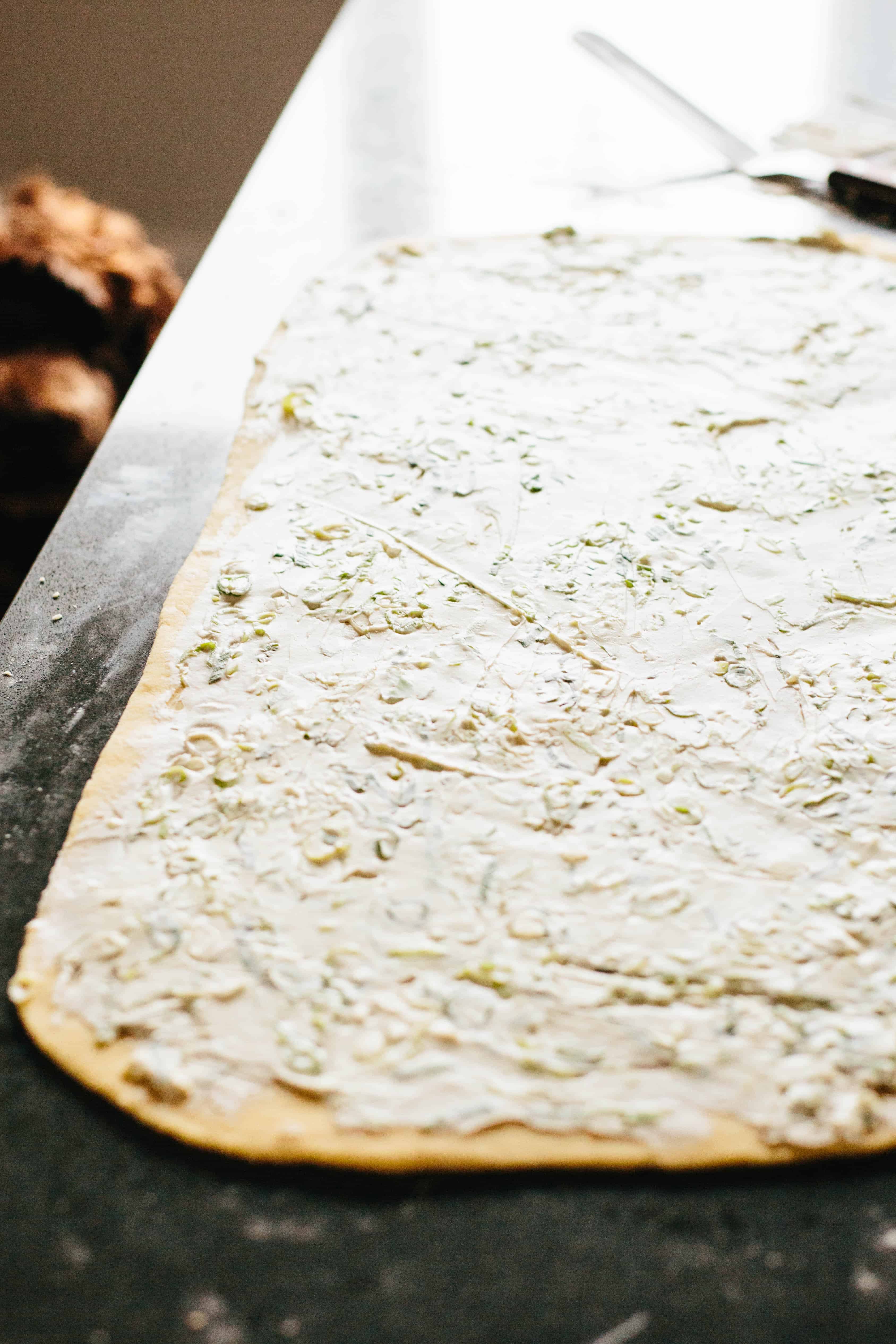 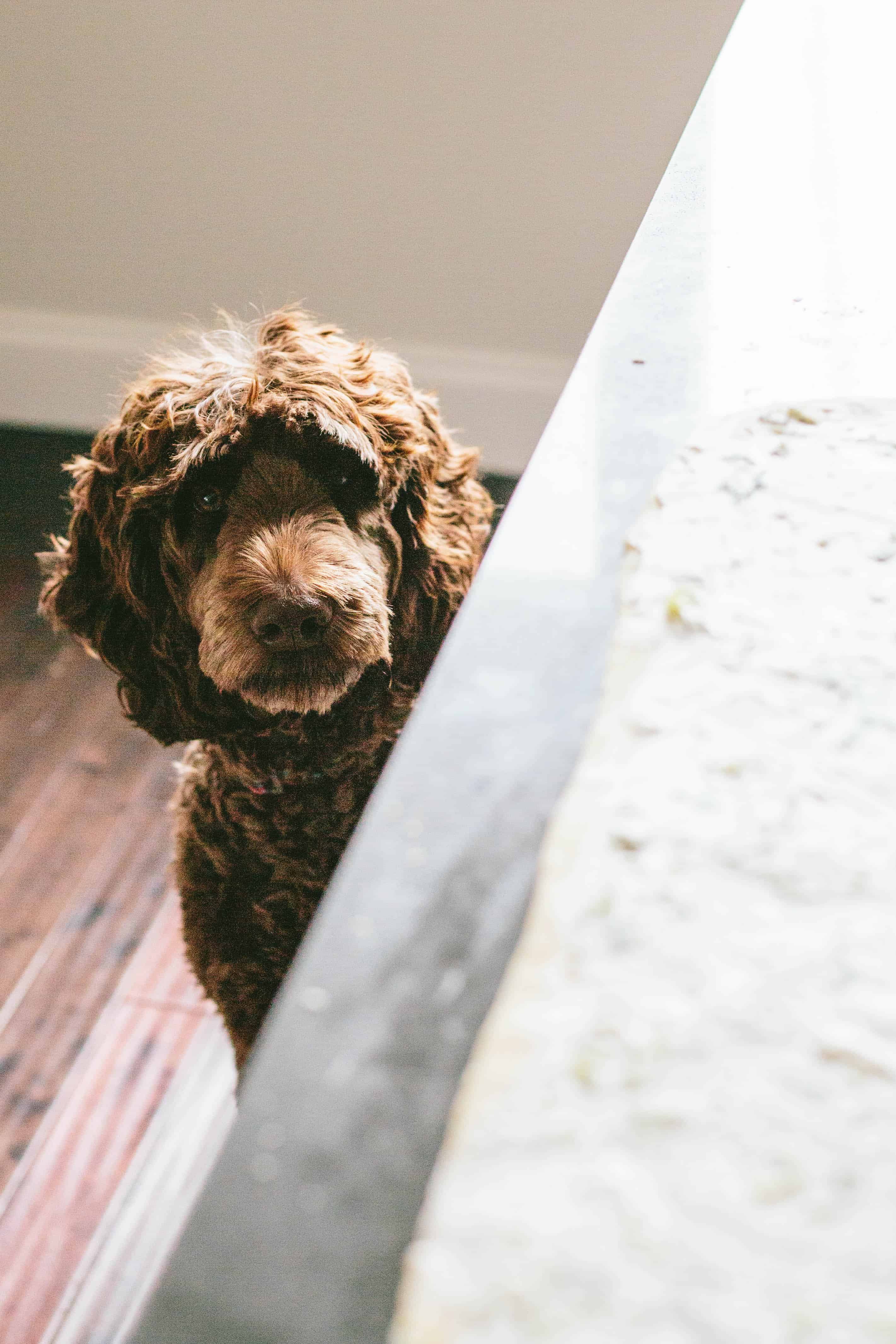 The dough gets rolled out nice and thin and then is spread all over with scallion cream cheese. As you can see, whenever I have food out on the counter (and especially anything with butter), a certain someone is always there lurking in the background.

I don’t care for most of the flavored cream cheeses out there, but I LOVE scallion cream cheese, especially with an everything bagel. The mild oniony bits go so well with the everything seasoning, and it’s a flavor combination I just can’t seem to get enough of. 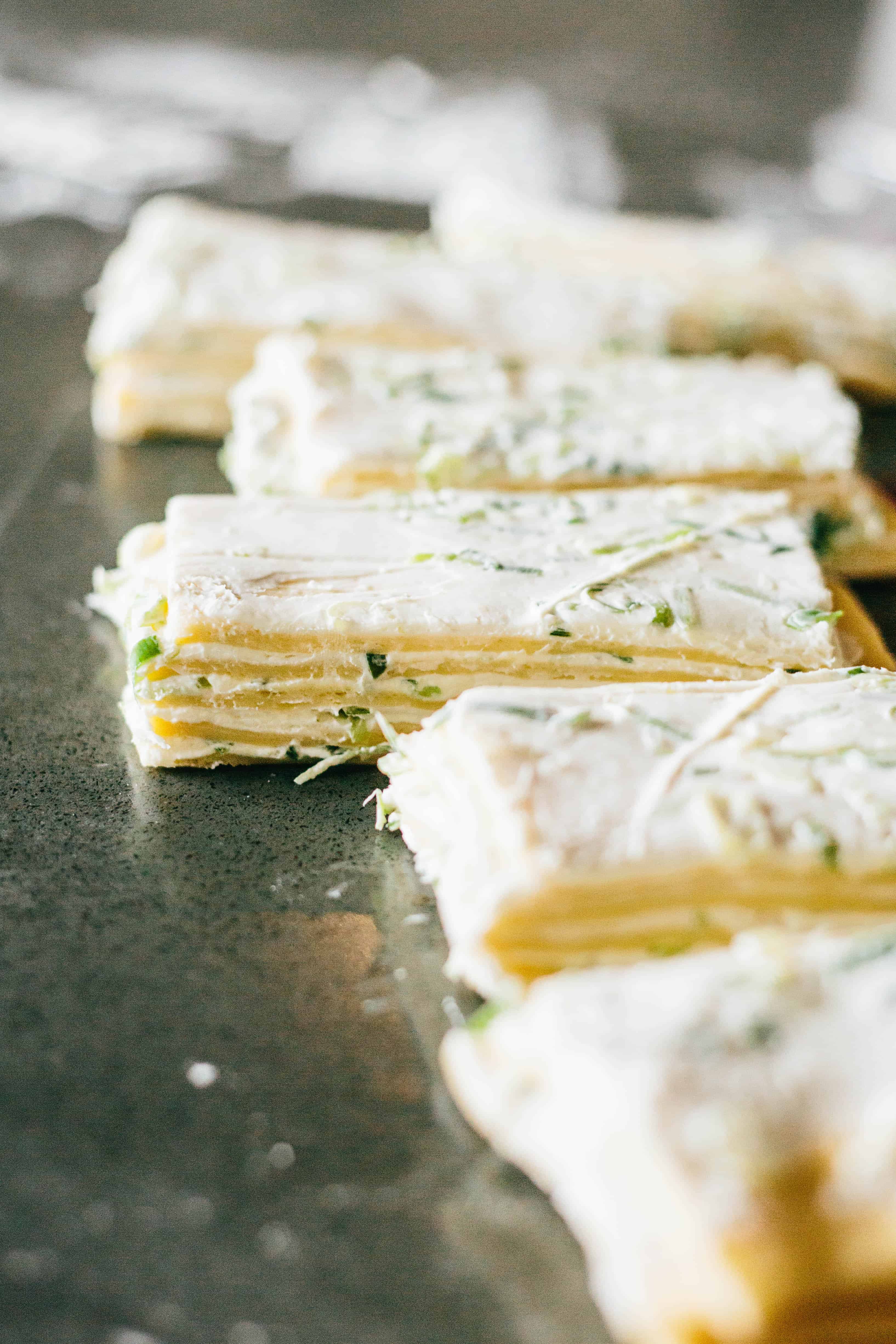 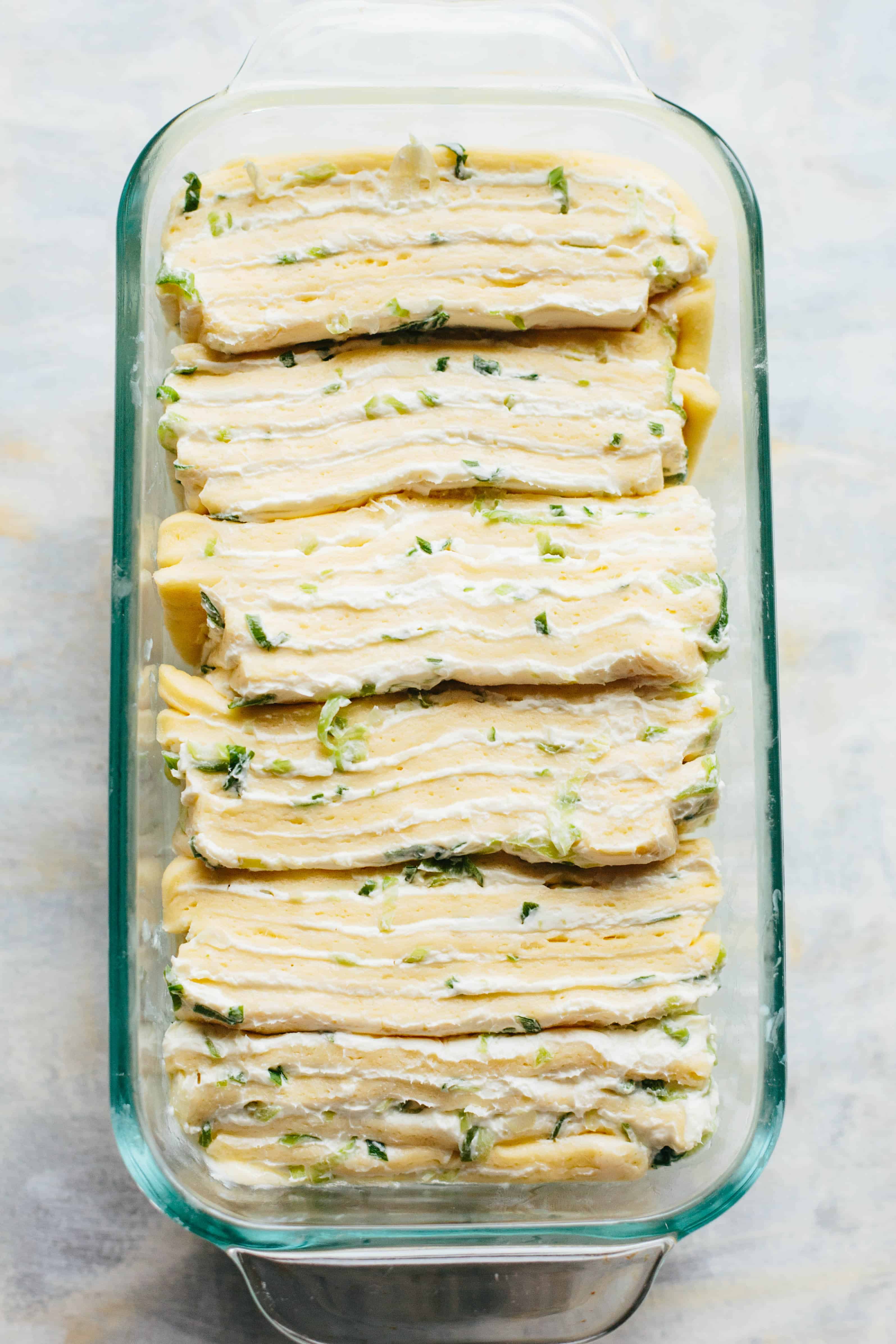 Cut the dough into 5 long strips and lay each one on top of the other to form one big stack. Then, cut that stack into 6 smaller pieces. Lay the pieces on their sides, then arrange them inside a buttered loaf pan. They don’t have to be perfect, I promise it doesn’t matter. Once baked, it’s going to look just fine. Let the dough relax and rise one more time, then brush with a bit of melted butter and sprinkle with as much everything bagel seasoning as your heart desires. For me, that means as much as I can possibly fit!

I used the “Everything But the Bagel” seasoning from Trader Joe’s and it worked here perfectly. There are plenty of other brands on the market, so feel free to use whichever you want. You can make your own everything bagel seasoning by combining sesame seeds, poppy seeds, dried onion flakes, dried minced onion and coarse salt. The upside to making it yourself is that you can play around with the proportions and tailor it just the way you like. 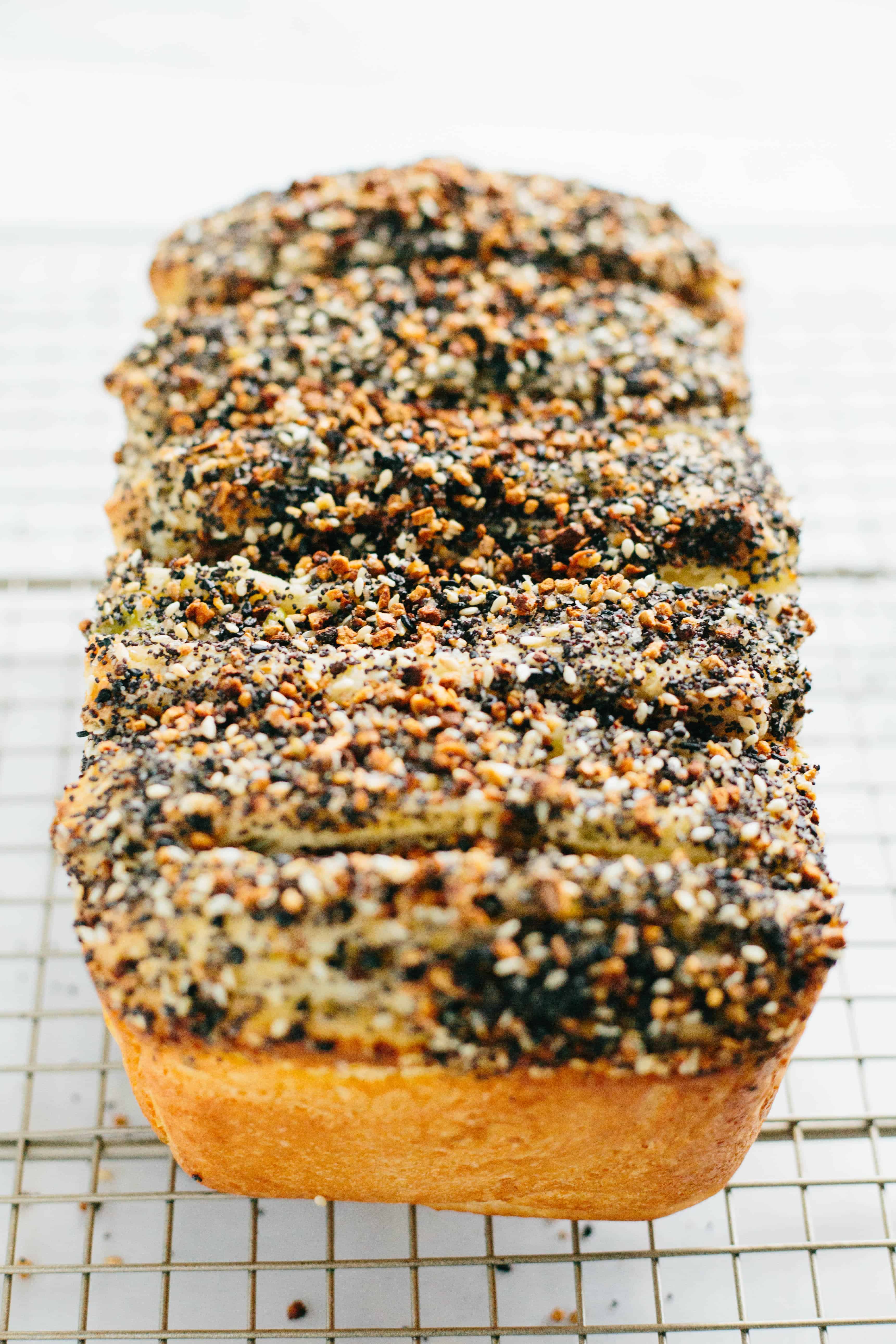 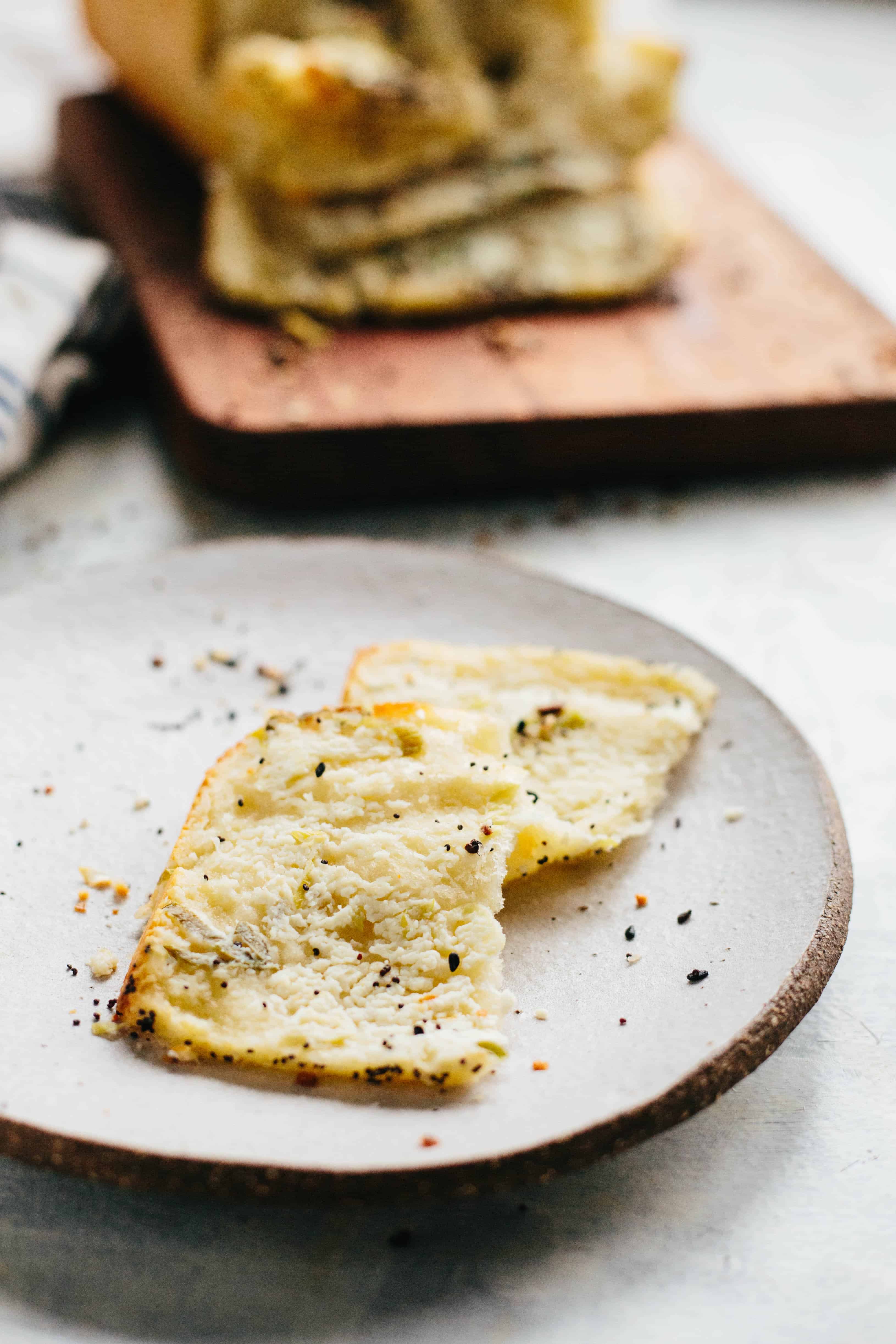 Once you remove it from the pan, just set it out on a platter and let everyone go to town. Between each layer of buttery, flaky dough you’ll find that melted scallion cream cheese which makes it so addictive! It’s like an everything bagel – only better – because it’s so much lighter in texture, but so much richer in flavor.

You can make this up to a day in advance and then bake it off Christmas morning if you like (just let it come to room temperature for about 30 minutes prior to baking. It would make the best Christmas breakfast ever! Although I don’t recommend making the whole thing on Christmas day, unless you have absolutely nothing else to do.

I can’t believe I waited this long to make a pull apart bread because it really wasn’t as challenging as I thought it would be. I’ll need to make up for lost time, so you can expect to see another one of these here soon. 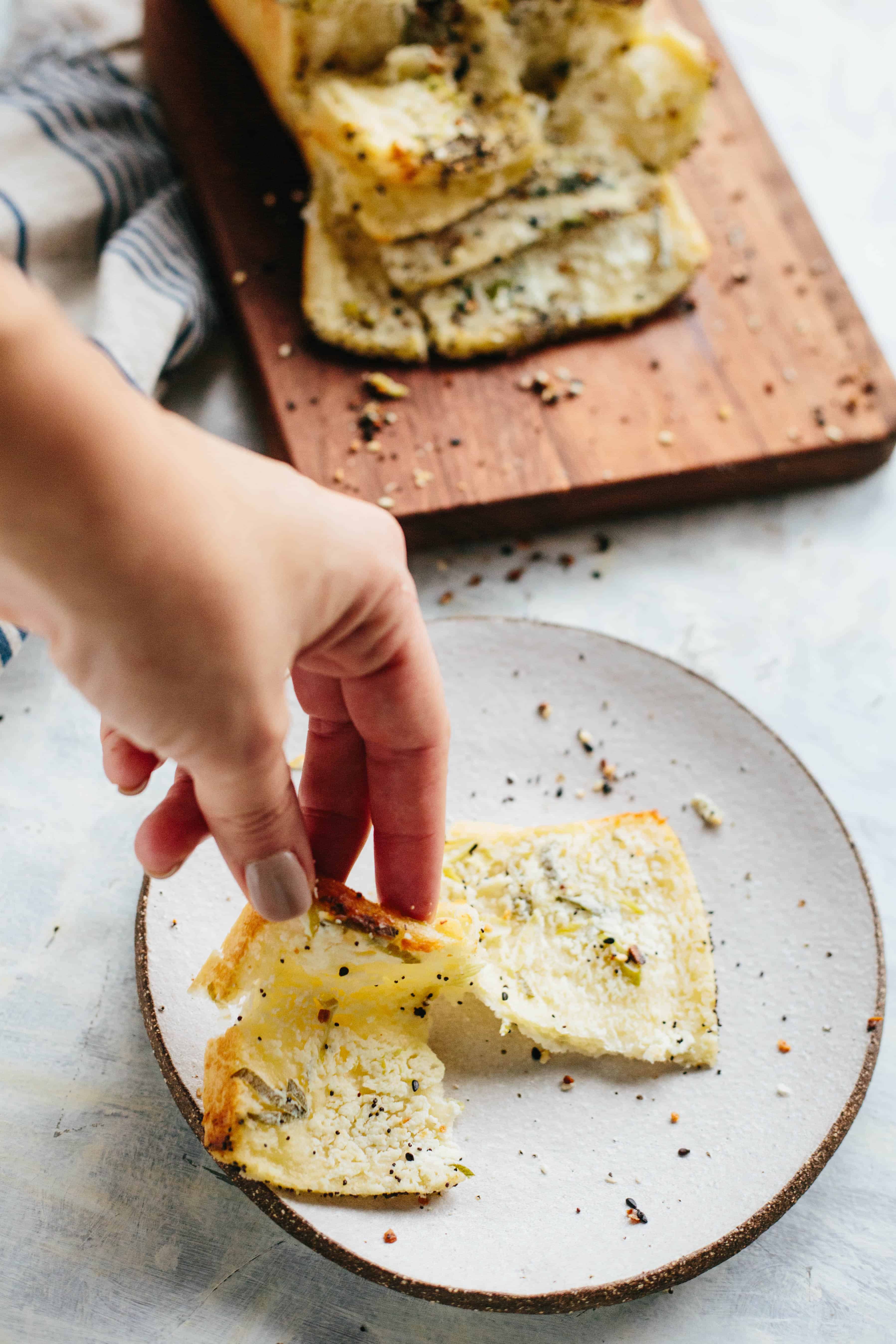 This recipe for Everything Bagel Pull Apart Bread with Scallion Cream Cheese is buttery, rich, flavorful and perfect for brunch!  Dough adapted from King Arthur Flour.

*King Arthur Flour recommends using the potato starch in this recipe to make the dough extra tender. They say you can substitute corn starch or omit it all together with no problems, but I haven’t personally tried it myself.

**I used Trader Joe’s “Everything But the Bagel” seasoning, but you can make your own by combining poppy seeds, sesame seeds, dried onion flakes, dried minced garlic and coarse salt in whatever proportions you desire.