This Raw Vegan Pumpkin Cheesecake tastes so decadent, you’d never know it’s made without any refined sugar, dairy or gluten! It’s assembled entirely in a blender or food processor and not baked, so it’s also infinitely easier than a traditional cheesecake.

Look, I know what you’re thinking. “You can’t make a cheesecake without cheese, Coley.” Hear me out.

As someone who staunchly considers themselves to be an omnivore and an equal-opportunity eater, I’ve always rejected the idea of dietary extremes and exclusions based in pseudoscience and trendiness. With that said, I do sometimes like to dabble in the realm of veganism. Never with the intention of voiding myself of all animal products, but simply because vegan food can actually be pretty delicious.

My rule of thumb when cooking this way is that the recipes must taste good on their own, without the need for substitutions. You can scour my website to find tons of recipes that happen to be vegan just because they are, not because they’re trying to be. What I mean by this is that I’m not a fan of foods that claim to be vegan versions of something that is not. Tofurky? Barf. And for crying out loud, stop spreading the rumor that nutritional yeast tastes like parmesan cheese. It doesn’t.

This past weekend I was invited to a vegan potluck, so I decided to try my hand at making a raw, vegan cheesecake. Why? Mostly because I was intrigued. The very idea of a vegan cheesecake goes against everything I believe, but it piqued my curiosity. I wasn’t really buying it, but I had to know for sure. I was skeptical and my expectations were low. It might taste okay. It might even taste good! But there’s no way in hell it’s going to taste like an actual cheesecake. 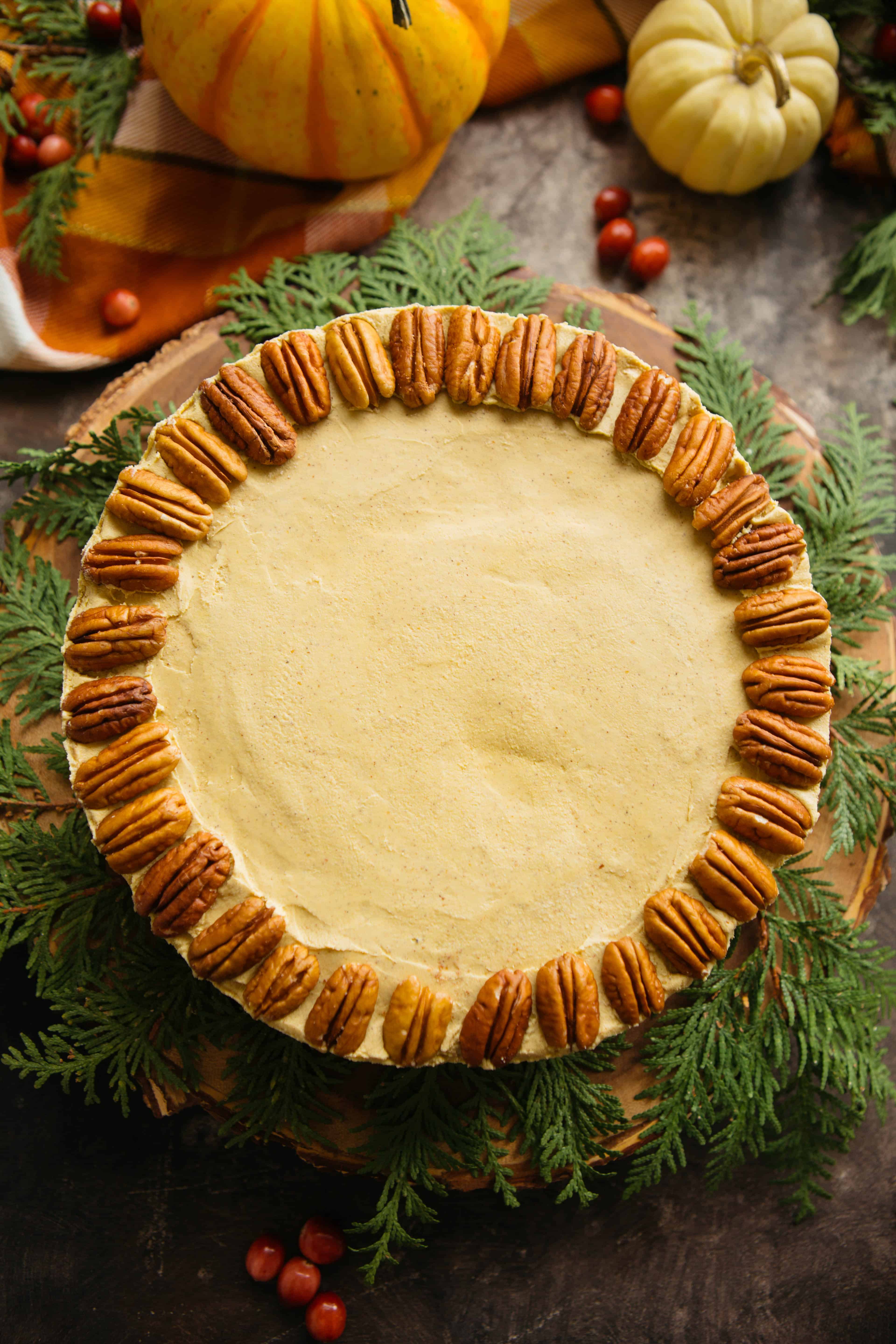 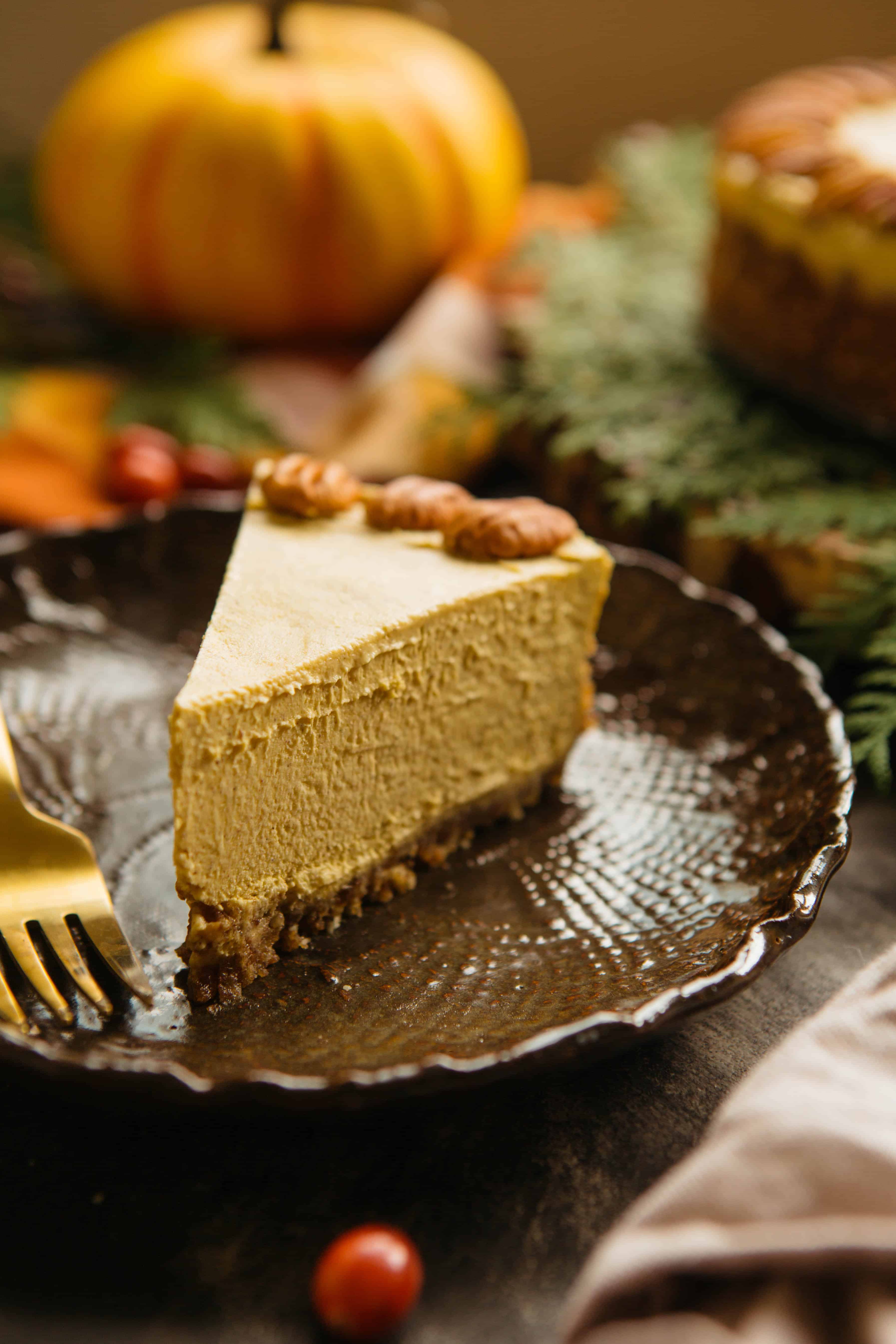 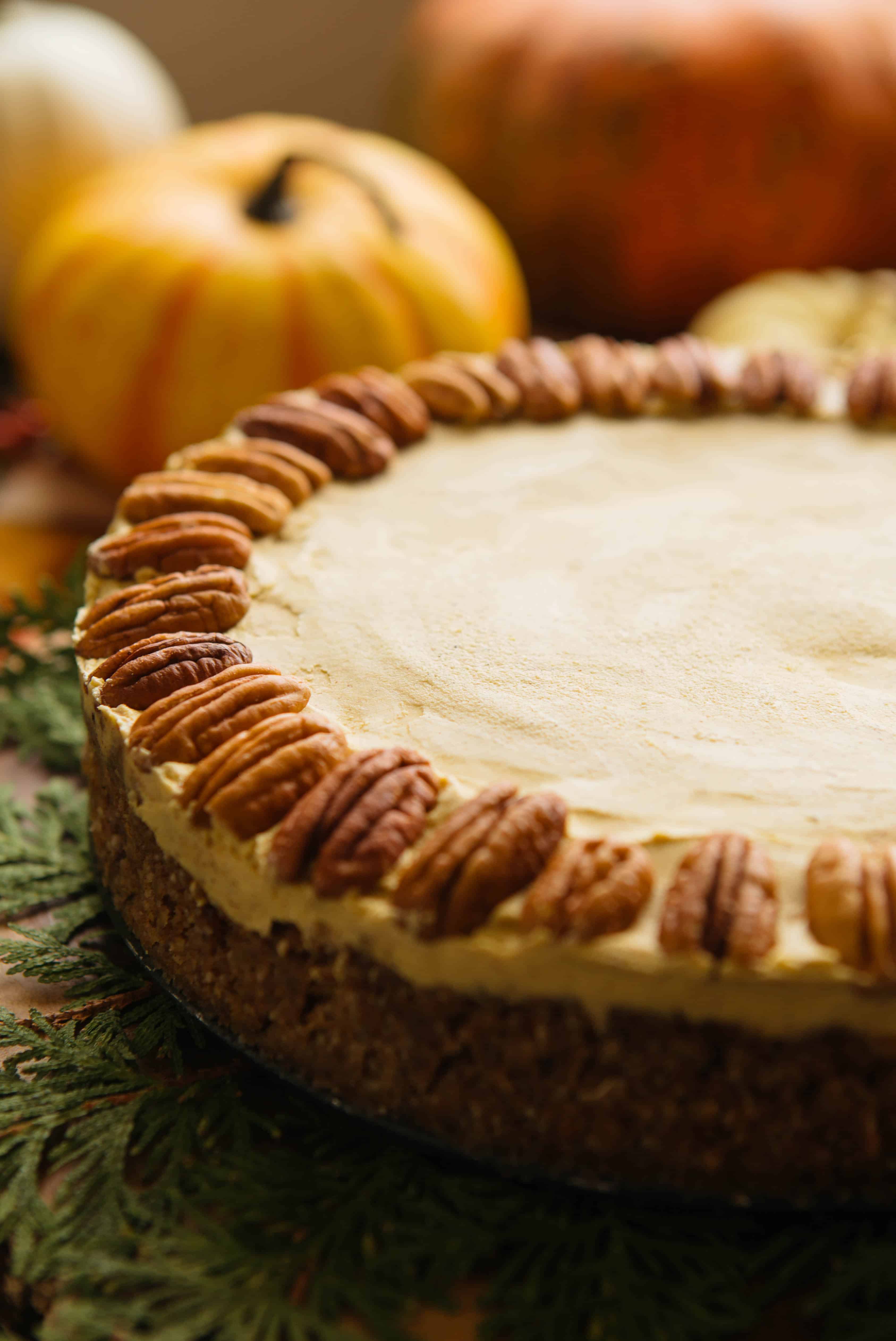 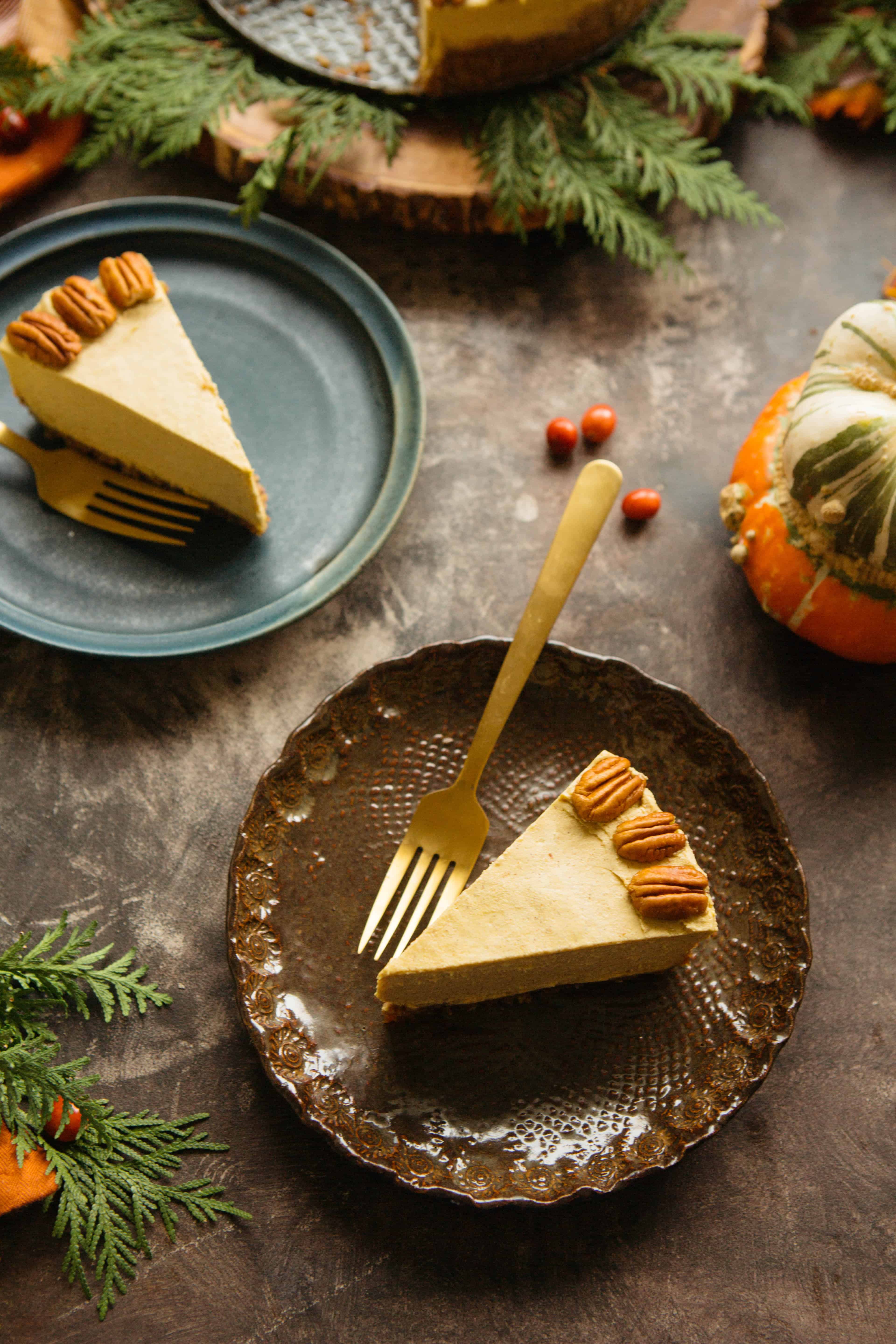 Not only was it good, it was really good, and it tasted damn close – shockingly, perplexingly close – to the real thing. The texture was spot on. Smooth and creamy, light but dense. It didn’t taste at all like cashews. It was tangy and flavorful just sweet enough. I was a believer, and I immediately wanted to make another.

So that’s exactly what I did. only this time around I made a pumpkin cheesecake, because, you know… fall! Even Chaser, the most dairy-obsessed person I know, agreed. I’m still trying to wrap my head around the whole thing.

Make no mistake that a vegan cheesecake is still, in fact, dessert. It is certainly not to be confused with diet food. But is it better for you than a traditional cheesecake? Absolutely. While it is calorically dense, it’s also made entirely from whole foods so it boasts a pretty healthy nutritional profile. Did I mention it’s also raw, Paleo, and totally gluten / grain free? I don’t even know what else I can say to sell you on it.

Oh! I know. How about the fact that it’s no-bake and actually easier to make – by a long shot – than traditional cheesecake, and for that matter, any pie, cookie or cake you can think of.

It’s the truth, and I’m confident that one bite will make you a believer. 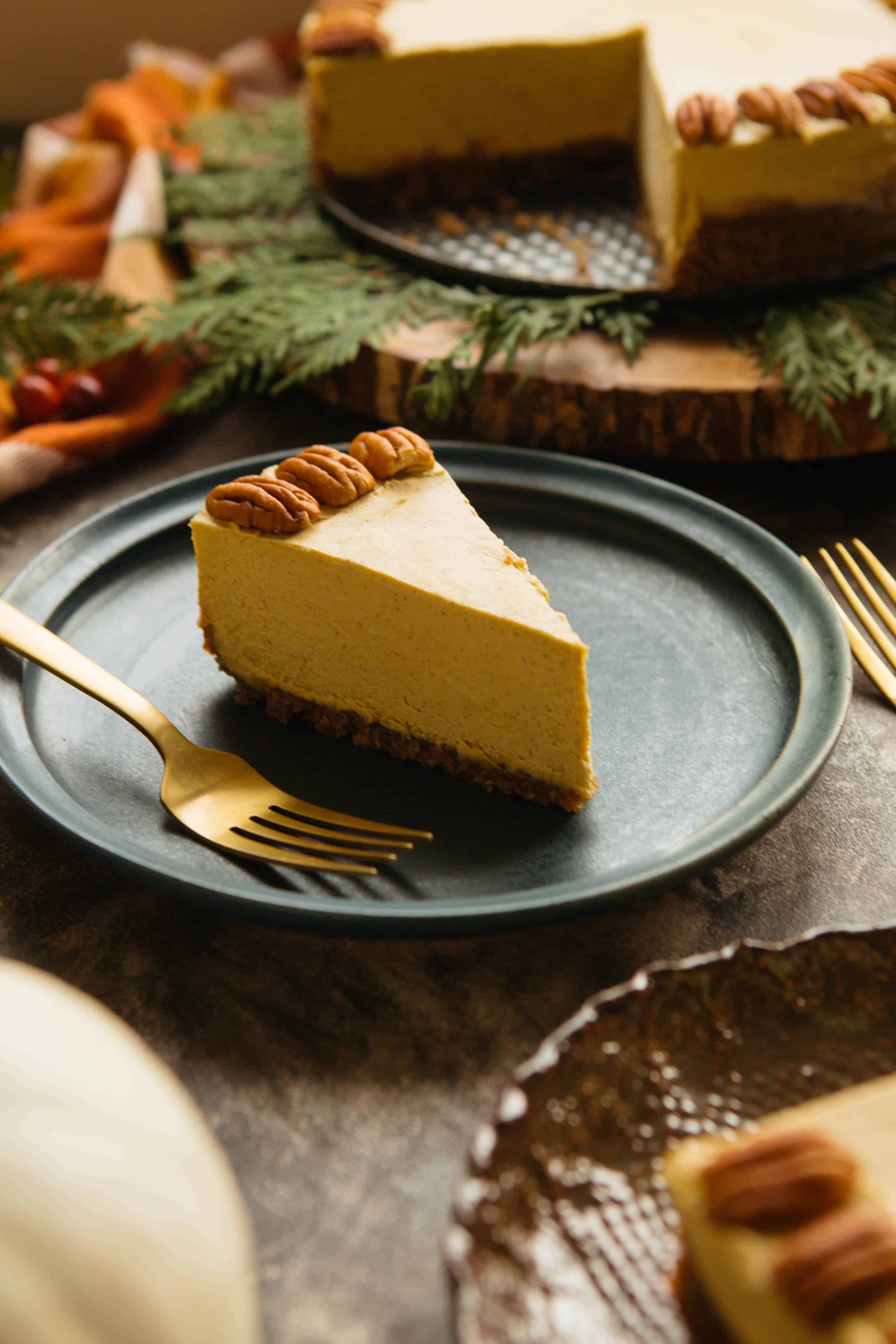 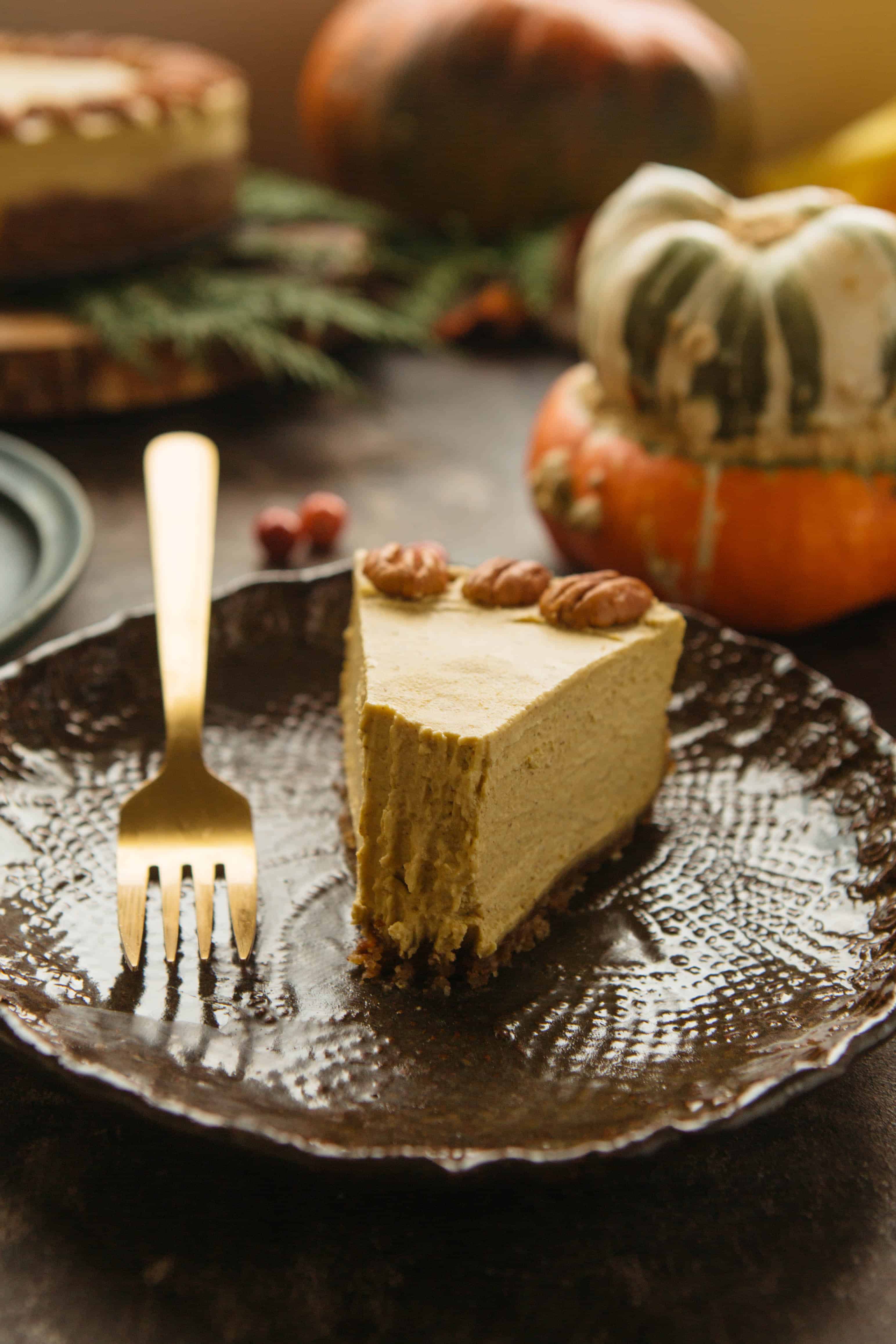 This Raw Vegan Pumpkin Cheesecake tastes so decadent, you’d never know it’s made without any refined sugar, dairy or gluten! It’s assembled entirely in a blender or food processor and not baked, so it’s also infinitely easier than a traditional cheesecake. 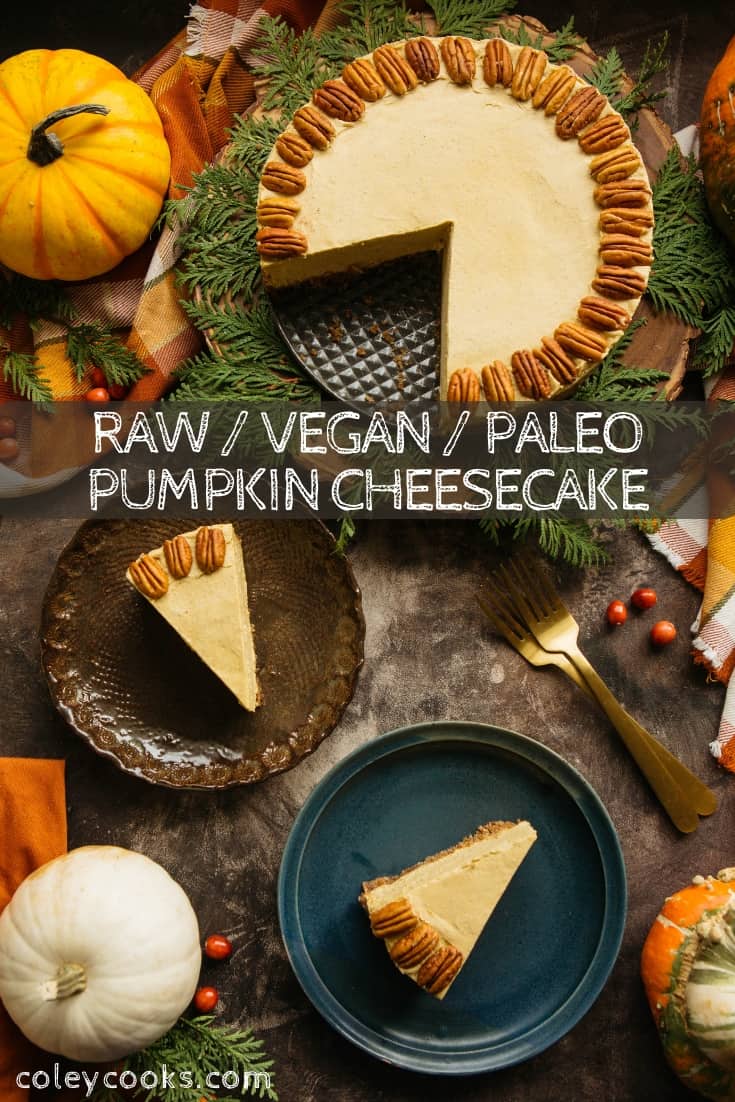