This shaved Brussels sprout salad with butternut squash, pomegranate and oven “fried” goat cheese is elegant enough for company, but easy enough for weeknights. A great recipe for Thanksgiving.

It’s fascinating how much the dialogue on vegetables has changed since I was younger. Growing up I’d never tasted a brussels sprout, and definitely never wanted to. They were in this category of nasty, elusive vegetables along with lima beans, beets and rutabagas. I had never actually experienced any of these foods, but I knew I detested them. My opinions were based solely on the commentary from 90’s sitcoms and Nickelodeon cartoons. 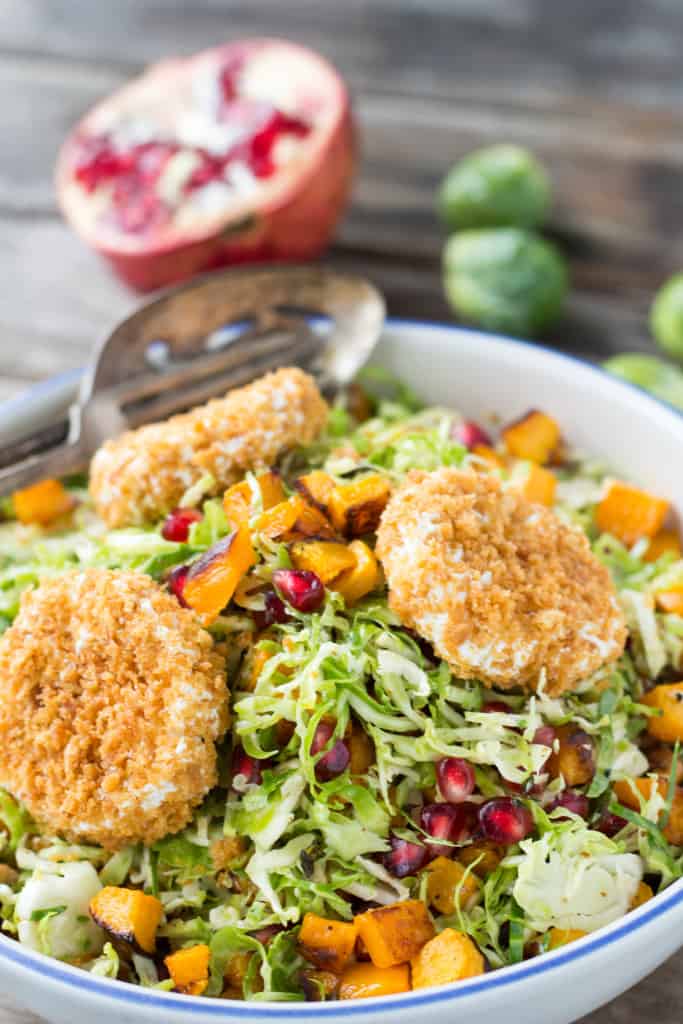 In retrospect, it’s crazy to think that this was ever actually a widely accepted ideology. Why a group of intelligent adults would teach impressionable young children to abhor an entire group of nutritious, environmentally friendly foods is puzzling.  The stigma attached to brussels sprouts and the like has been around as long as I can remember, yet in recent years there’s been a massive shift in how we approach plant based food. Thanks to the various movements towards eating “real food,” brussels sprouts have suddenly become one of the most talked about and heavily consumed vegetables on the market. It’s a incredible to see how much the perception has changed in such a short amount of time.

Whenever I hear someone gush about how much they love brussels sprouts, I can’t help but laugh to myself because seems like just yesterday they were regarded as one of the most despicable vegetables on the planet. They’ve gone from being the most hated to the most loved vegetable in the country practically overnight. What was once only served completely cooked to death and smelled like rotten eggs has now been adopted by chefs all over as being one of the most versatile and exiting vegetables to play with. 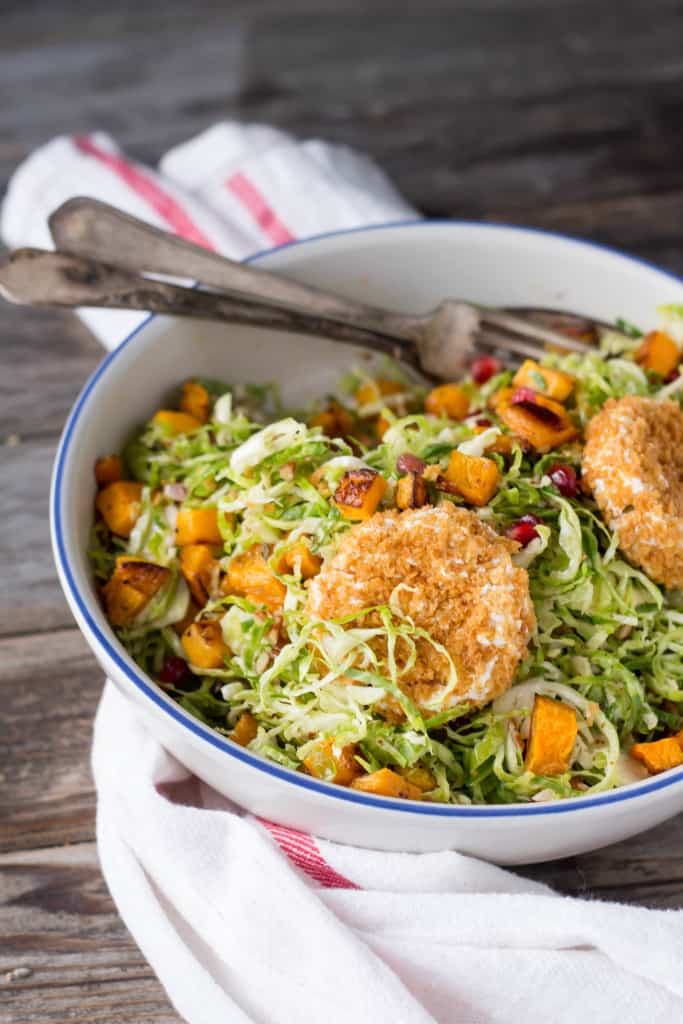 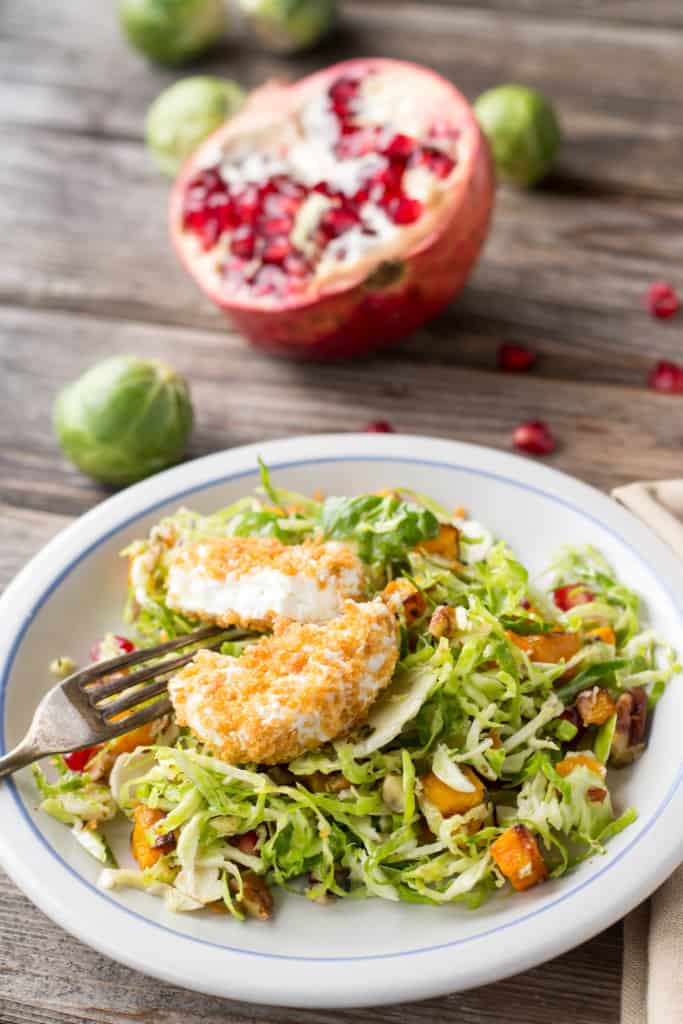 We’ve all come to appreciate the crispy, caramelized flavor of a well-roasted sprout, but have you ever tried them raw? Sliced nice and thin, raw brussels sprouts have a texture more tender than cabbage, but more substantial than lettuce. They can stand up to a myriad of bold toppings and dressings without ever taking over. Raw brussels sprouts are sweet, mild and fresh – a far cry from the putrid, mushy spheres that was once all we ever knew they could be.

I had my first taste of raw brussels sprouts last year at Atchafalaya restaurant in New Orleans in a salad made by my friend and former Food Network Star competitor Chris Lynch.  The sprouts we’re shaved nice and thin, tossed with green apples, pecans and a bacony vinaigrette. It was topped with a fried medallion of goat cheese, which was warm, creamy, crisp and gave a lovely contrast to the cool, fresh sprouts. After the first bite, I was suddenly enlightened to the beauty and possibility of raw brussels sprouts, and knew I had to give them a try at home. 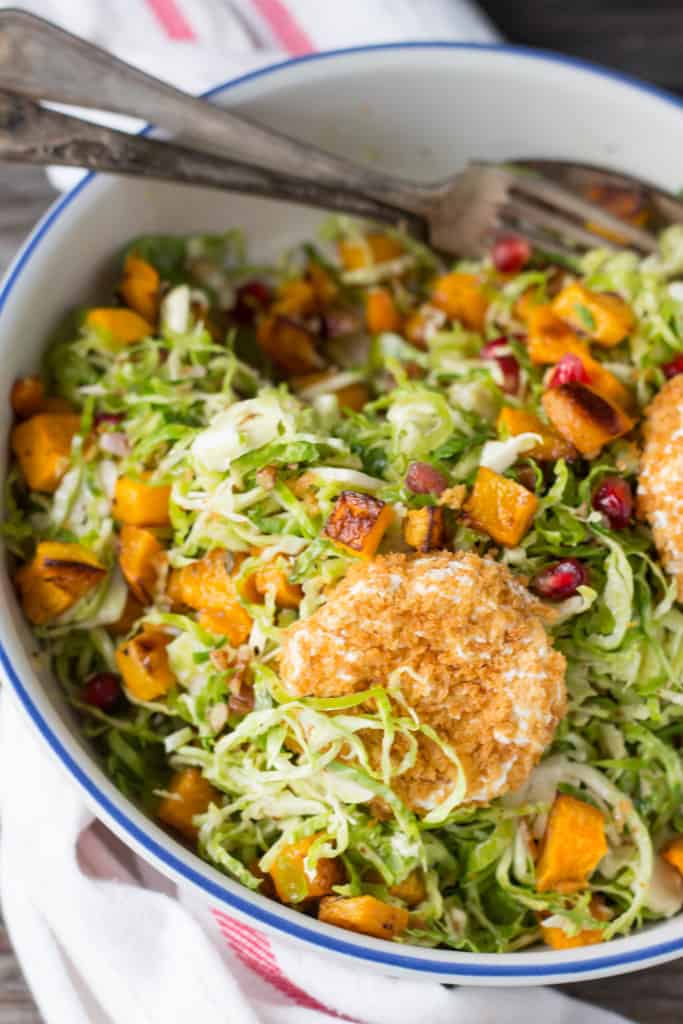 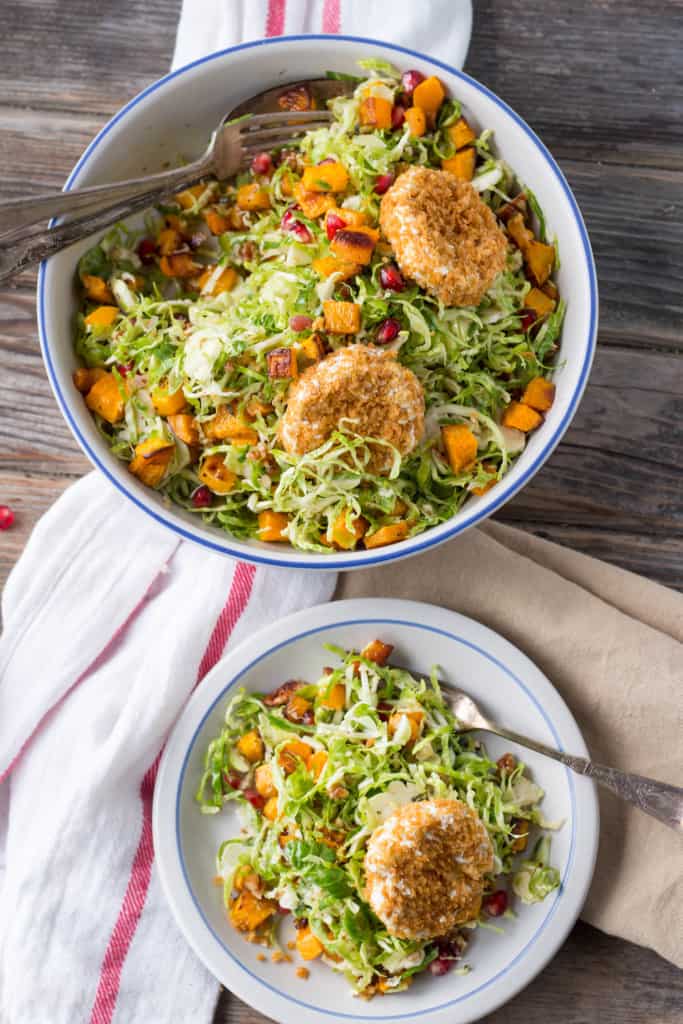 Now, that fried goat cheese? That’s where it’s at. If there’s anything that can improve goat cheese in the first place, it’s coating it in crispy breadcrumbs and warming it to an oozy, gooey state. But having to go through the process of frying solely for an accent on a salad seems a bit exorbitant. We’re home cooks, which means we need to do all the clean up ourselves, and that makes unnecessary frying out of the question. So to solve the problem, I’ve developed a method of first toasting the breadcrumbs, coating the goat cheese and then gently warming in the oven. You get the same overall effect with only with a fraction of the effort.

Thanksgiving is coming up next week and I’m willing to bet you’re still looking for something to make (like me!). If your menu’s been set for months and you already have half of it prepped well la-di-freaking-da for you. To all my procrastinators out there, consider adding this one to your long list of options. Nearly all elements can be made in advance, it’s healthy while still being a little bit decadent and it’s totally on trend for fall. Plus, the best part? Kids will eat it, too. 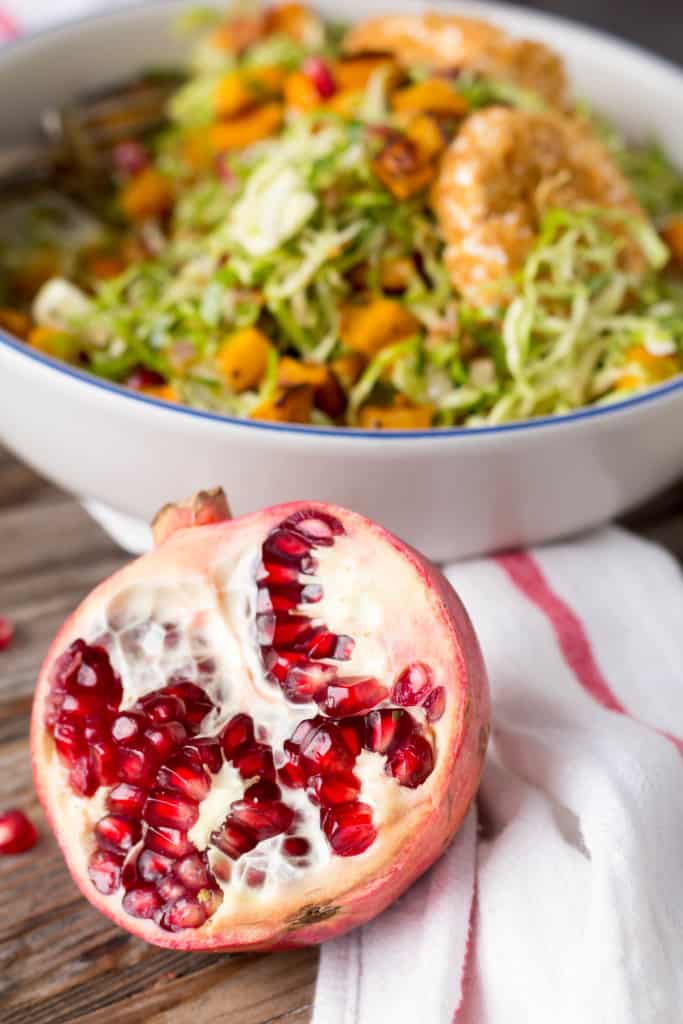 And here’s an easy trick for removing the seeds from a pomegranate without making a mess!

This shaved Brussels sprout salad with butternut squash, pomegranate and baked goat cheese is elegant enough for company, but easy enough for weeknights.

For the Goat Cheese

To Make the Goat Cheese